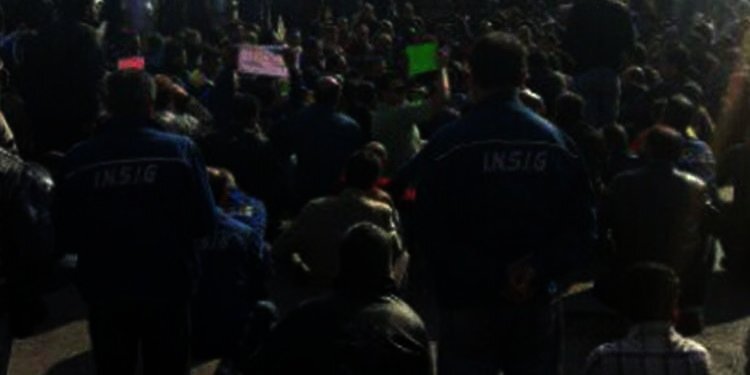 The Iran National Steel Group workers rallied today for the 37th day on the streets of Ahvaz chanting against regime officials.

The angry workers were marching towards the home of Ahvaz’s head of Friday Prayers before being stopped by riot police.

The steel workers chanted, “a nation has never seen such injustice”, “they use Islam as a stepping ladder and have degraded the people”, and addressing Ahvaz residents they chanted, “Ahvaz has turned into Palestine, why are you still sitting”.

The workers also addressed the Iranian regime and chanted, “victory is near, death to the deceitful government”, and “every worker calls for the death of tyrants.”

The steel workers have rallied for 37 days despite the government’s threats, and the summoning and arrest of workers demanding that the National Steel Group factory be transferred to the public sector, the release of detained workers and their unpaid wages.

“Threats and prison are no longer effective,” they chanted in response to threats by the government to end their protests.

The more than 500 workers protested nine months of their unpaid wages outside the Borujerd Governor’s office.

Reports indicate that the workers of the Mahshahr Farabi Petrochemical Plant in the southern province of Khuzestan also held a gathering today.

This is the fourth round of protests this year by the petrochemical workers who are protesting unpaid wages and the company’s failure to carry out the Classification of Occupations Plan.

The workers said that the factory officials refused to address their requests and “wasted time” and therefore vowed to continue their strike.

The street peddlers said that they sell goods on the street out of desperation as a way to make ends meet. Kurdistan province and other western provinces have some of the highest unemployment rates in the Iran.

A group of Ahvaz Medical Sciences University retirees gathered outside the university in protest to two years of unpaid pension rewards.

According to the protesters’ representative, the pensioners had not received their rewards and other wages since 2016.

“Despite our inquiries, relevant authorities have not responded on the matter,” he added.

The protesters, who rallied for two hours outside the university, said that they had previously held protests outside the governor’s office to no avail.

Creditors of the Caspian Credit Institution, who are the victims of corruption and have lost all their money, gathered outside the Financial and Bank Crimes Court in Tehran.

The creditors chanted slogans against officials of the Caspian Institution, which is reportedly owned by the Revolutionary Guards Corps.

“The result of the officials’ work is corruption and embezzlement,” they chanted.

“Many of the institutions, including those that merged in 2016 to form Caspian, were allowed to gamble with deposits or run Ponzi schemes with impunity for years,in part because they were owned by well-connected elites: religious foundations, the Islamic Revolutionary Guards Corps or other semiofficial investment funds in the Iranian state,” the NYT wrote.

A large number of young unemployed residents of Rafsanjan and Pariz in the southeast province of Kerman rallied and marched at the Sarcheshmeh Copper Factory in protest to the factory’s employment of people from other regions rather than locals.

They had also gathered yesterday outside the factory.

The hundreds of protesters chanted slogans against regime officials and demanded a response.

Farmers in Isfahan gathered outside the office of the head of Friday Prayers in protest to water scarcity which has destroyed their crops leaving them without a source of income.

Reports indicate that a significant number of women joined the protests today.

The angry farmers chanted “we will not go home until water is brought back to the river” referring to Zayanderud river, and “the water of Zayanderud is our inalienable right”.

The Zayandehrud, once Iran’s largest river, used to have significant flow all year long, unlike many of Iran’s rivers which are seasonal, but today runs dry due to water extraction before reaching the city of Isfahan.

In the early 2010s, the lower reaches of the river dried out completely after several years of seasonal dry-outs.

Orumieh University Students joined Iran protests today and rallied in the university’s campus against poor food quality and other problems at the university.

The students set their food plates in the campus as is customary in student protests and chanted “students will die rather than be degraded.”

According to the Secretary of the Orumieh University Student Association, the students had gathered in the university campus demanding to talk to the head of the university but he never showed up. 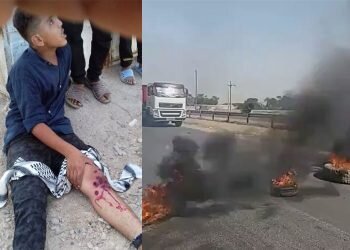 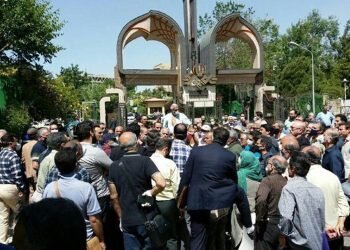 Why are all sectors of Iran’s society protesting?