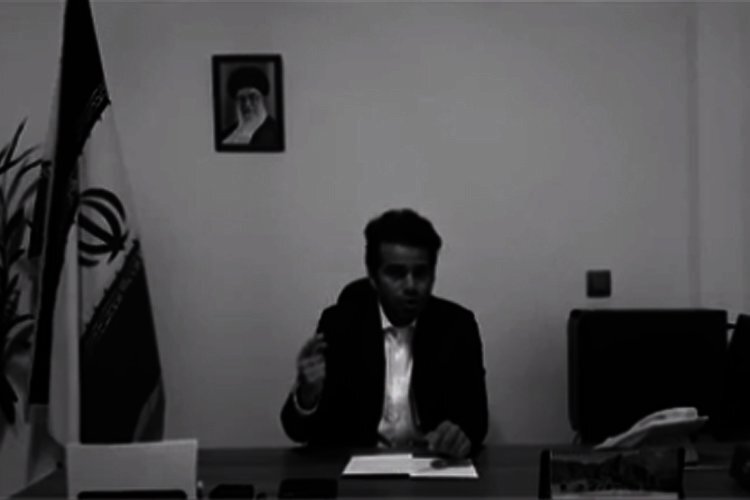 Following more than two weeks of protests by Haft Tappeh Sugarcane factory workers, the company CEO, Omid Asadbeigi, who is supposedly on the run for “currency misconduct”, responded to the protests via a video message.

Sugarcane workers in Shush in Iran’s southern province of Khuzestan have been rallying for the past 25 days in protest to their unpaid wages, the continued detention of labor activist Esmail Bakhshi and the privatization of the factory.

In an obvious attempt to show his loyalty to the regime, the 31 year old CEO was seen in the video sitting behind a desk with a large flag of the Islamic Republic to his left and a picture of Iran’s Supreme Leader, Ali Khamenei, on the wall behind him.

It was not clear where the video was recorded.

In the message released on Sunday night, Asadbeigi called for an end to the strike.

Echoing Iranian officials, he also said that the strike brought nothing but “disorder” and caused “numerous problems for the factory”.

“I want to talk about rumors spreading in these past few days in various (Telegram) channels and between (Haft Tappeh) personnel on the issue that the factory has to be acquired by the public sector. The complex has been given to the private sector in accordance with national laws and all the costs have been paid and large expenses have been incurred by the private sector. And by no means will the complex be returned to the public sector. It will remain private,” Asadbeigi stated in the recorded message.

“This complex has not been leased or rented for a certain amount of time. We all have to know that the complex has been purchased and until there is a private sector, it will remain in this sector. So I deem it necessary to immediately put an end to these rumors,” he added.

There are ambiguities surrounding Asadbeigi’s whereabouts and the supposed charges brought against him.

A number of Iranian government and judicial officials, including Judiciary spokesperson Mohseni Ejehi had said that Asadbeigi was wanted for misconduct though this was contrary to a statement made by Mahmoud Vaezi, the Head of the Office of Iran’s President, who said that the CEO was in custody.

These kinds of obscurities are not uncommon in Iran.

The ruin of factories and institutions has plagued the Islamic Republic of Iran in its 39 years of existence.

Many manufacturing companies have become bankrupt and shut down in various stages in the life of the Islamic Republic.

During the government of Mahmoud Ahmadinejad, who was president from 2005 to 2013, the Dezful Sugar Company was shut down. The sugar company, the largest producer of sugar and sugar cubes in the Middle East at the time, subsequently dismissed all of its 35,000 workers.

Haft Tappeh suffered a severe recession during Ahmadinejad’s time in 2006 when Khamenei eliminated the tariffs for sugar imports. The sugarcane workers staged protests the following year.

In January 2016 two young men, Mehrdad Rostami and Omid Asadbeigi who owned Zenus and Ariak Ltd. bought the Haft Tappeh Sugarcane complex at around one tenth of the actual price for 218 billion tomans in an auction.

In 2017, workers came out in force to protest the privatization of the company arguing that there were huge amounts of money being embezzled behind the scenes.

In 2018, the Haft Tappeh Sugarcane factory CEO Omid Asadbeigi was said to have run off after being charged with currency misconduct.

The workers once again started their protests in November which has continued for 25 days in protest to not receiving four months of their wages and the privatization of the company.

Protest on the rise in Iran as crises accumulate

Protest on the rise in Iran as crises accumulate