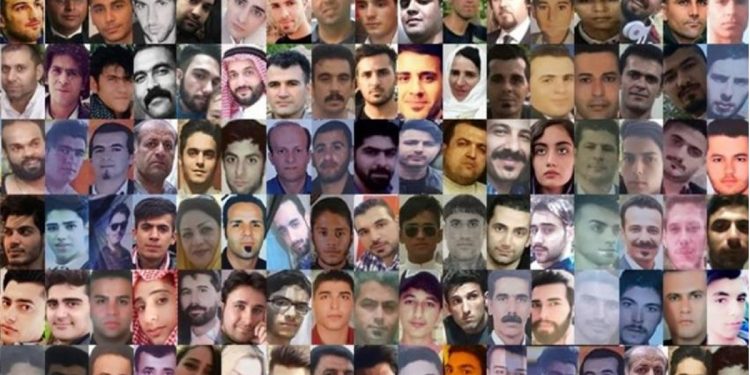 On the first anniversary of the November 2019 anti-government protests that swept across Iran, Twitter users used the hashtag #كدام_آبان, “Which November?” to commemorate fallen protesters, and to express their outrage over the brutal suppression of the protests.

The hashtag started when the sister of a slain protesters was called by the office of the regime’s Supreme Leader.

“They called my mom’s mobile. She gave the phone to me, and the caller said he was from the Supreme Leader’s office,” Pouran Hashamdar, sister of fallen protester Mohammad Hashamdar said in an interview with Radio Farda,

The man was calling about the Hashamdar family’s complaint over the killing of their son.

“He asked me if I filed a complaint. I said yes. They asked, what is it about? I said, my brother was killed last November (Aban in Persian). He said, which November? I said, the bloody November of 2019. He said we are pursuing your case. And that’s all he said.”

The “Aban” protests are very well known in Iran. The report outraged Iranians who say that the response from Ali Khamenei’s Office showed the regime’s indifference over the brutal killing of at least 1,500 protesters.

Twitter users turned the Office’s response to a hashtag to remind the regime of the atrocities it committed last year.

Photos and footage of fallen protesters and slain children including 14-year-old Nikta Esfandani, 17-year-old child laborer Mohsen Mohammadpour, 16-year-old student Mohammad Dastankhah, 27-year-old Pouya Bakhtiyari and many others were tweeted and retweeted in their memory.

A user tweeted, “They killed my son here, my father on the next street. My sister was killed on her way back home, my brother died under torture in prison. My mother was killed in the square, my daughter on her way to school. And me, I was torn to pieces every day of my life. Aban will go on.”

A user posted 14-year-old Nikta’s picture and wrote, “Tomorrow they will shoot at her head,” referring to the first anniversary of the day Nikta was shot and killed by security forces.

Another user tweeted in reply to “which November?” and wrote “the same November in which you shot 13-year-old Amir Reza Abdollahi in Shahriar.”

Another user wrote, “the same November in which you gave direct orders to shoot protesters in the head, and not to fire in the air to prevent bullets from going to waste and in which you only sent undercover agents to arrest protesters from fear of your own lives.” This is a reference to a leaked police radio recording from the November 2019 protests.

Many users expressed anger over why the exact number of fallen protesters and other details of the brutal crackdown has yet to be announced by the regime after one year.

A twitter account that analyzes social media activities wrote that on November 13, that the hashtag #کدام‌_آبان was seen 159 million times, and tweeted and retweeted 110,000 times.

Other hashtags used were “bloody November” and “November will go on”, which started from the first day of the Persian month of Aban (October 22).

Later, in a December 23 report, Reuters said Iranian interior ministry officials also stated that 1500 protesters were killed during the three to four days of protests across the country. According to the report, Khamenei gathered his top security and government officials, and issued an order: Do whatever it takes to stop them.

Amnesty International said in March that 23 children were among those gunned down on the streets in November 2019.

Almost a year after the bloody November 2019 protests, many protesters are still detained with heavy prison terms. Two protesters were hanged while at least eight have been sentenced to death.