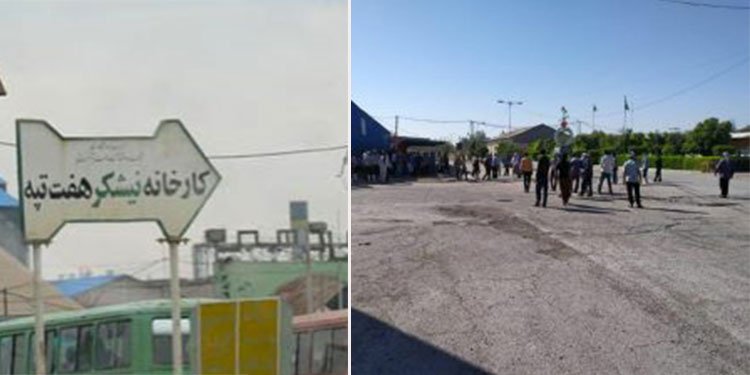 Sugarcane workers in southwestern Iran took strike action for five days in a row to demand three months of their unpaid wages and benefits. The Haft Tappeh Sugarcane Company workers gathered outside the company building in the southwestern city of Shush. The workers are demanding three months of unpaid wages, better work conditions, the return of laid-off workers, health insurance, and the return of the company to the public sector.

An independent representative of the Haft Tappeh workers said that the workers would continue their protests until their demands were met.

The unidentified representative who spoke to Emtedadnet Telegram Channel said that workers had trouble providing their basic needs including food. In videos posted on social media platforms, workers said they had to “borrow” bread from bakeries.

According to Emtedadnet, the sugarcane workers initially took strike action on Sunday, June 14 inside the factory. Since they were completely ignored, around 5,000 workers took their strike outside the administrative building of the company from Monday until Friday.

Haft Tappeh sugarcane workers have protested many times in the past. Workers have been detained, tortured, and persecuted for demanding their rights.

The former CEO of the company, Omid Assadbeigi is currently being tried for financial corruption. During the trial, Assadbeigi said he had bribed the current governor of Khuzestan by giving his wife $200,000.

In 2018, the Haft Tappeh Sugarcane factory CEO Assadbeigi was said to have run off after being charged with currency misconduct.

The workers once again started a strike in November 2018 for 25 days in protest to not receiving four months of their wages and the privatization of the company.