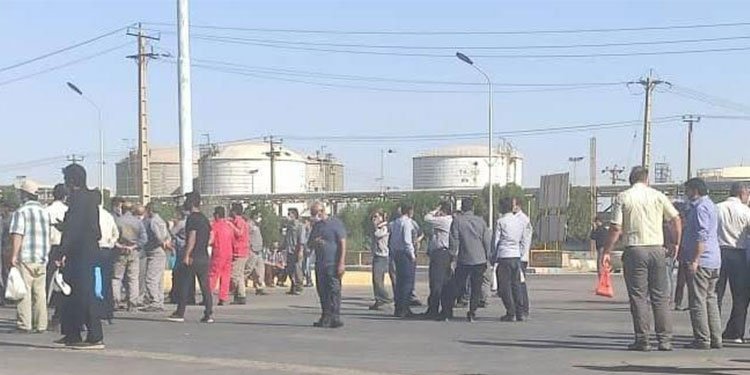 Thousands of Iranian workers, including workers in the lucrative oil and gas sector, have taken strike action to demand higher or unpaid wages.

Iran’s impoverished workers, who were already struggling to make ends meet as the country’s most vulnerable class, were met with increased pressure during the coronavirus outbreak. Many workers have become unemployed or are forced to work in dangerous conditions while receiving very low wages or no wages at all.

Oil and gas workers in Abadan, Ahvaz, Qeshm, Mahshahr, Lamerd, Dasht-e Azadegan and Kangan in southwestern Iran started their strike action on Saturday. Refinery workers in Isfahan, central Iran, joined the strike a day after while workers of a power station in Asaluyeh, southern Iran joined the strike today.

They say that their wages are too low to compensate for their extreme working conditions under the 50°C/122°F heat in southern Iran.

The Iranian workers have said that they will continue their strike until their demands are met.

Iran’s petrochemical industry has suffered serious blows and financial losses from US sanctions.

Today was the 51st day of strike action by workers of the Haft Tappeh Sugarcane Factory in the southwestern city of Shush.

After 51 days of protest, the workers of the Haft Tappeh Sugarcane Company have still not received three months of their unpaid wages. On Saturday, August 1, three members of Iran’s parliament went to meet with the workers.

Citing his five-hour meeting with the sugarcane workers, lawmaker Nezameddin Moussavi said that he had “seen the depth of the catastrophe that has taken place over the years in the name of privatization”.

After his meeting with the Haft Tappeh workers, lawmaker Ahmad Naderi, described the workers’ conditions as “distressing” in a tweet.

“The current condition of Haft Tappeh is the result of neo-liberal policies and uncontrolled privatization based on (cronyism). We must think seriously about the perpetrators.”

Another member of parliament, Ali Khazrian, said that things would only return to normal with the prevention of “privatization based on cronyism”.

“Haft Tappeh is a symbol of the failed policy of corrupt privatization that has started since the 90’s and is being strongly pursued in Rouhani’s administration,” he added after meeting with the workers.

They are now demanding the immediate payment of three-month of their overdue wages, the renewal of their insurance, the return of fired employees, and the immediate arrest of the company’s CEO, Omid Assad Beigi.

Assad Beigi is currently on trial for his involvement in a $1.5 billion FOREX corruption case.

Workers of the Heavy Equipment Production Company (HEPCO) also joined nationwide strikes on Saturday and still on strike after four days. On August 2, ILNA reported that the workers were demanding the activation of the company’s production lines and two months of their unpaid wages.

They also said that they had not received a portion of their wages and bonuses in 2016 and 2017.

They want the company’s “incompetent managers” who they say cannot solve the workers’ problems to be ousted.

HEPCO, once the largest heavy equipment manufacturer in the Middle East, currently employs no more than 760 workers, all in danger of losing their jobs as their employer is near bankruptcy.

According to the protesters, several workers have contracted COVID-19 because workers are not given protective gear and must provide their own gear.

Construction workers in the western province of Kurdistan told the state-run ILNA News Agency that they have been unemployed for the past five months since the start of the COVID-19 epidemic in the country.

“Although we paid our premiums, we have not received unemployment insurance in these critical conditions,” they told ILNA on August 2.

This is while many Iranians Kurds normally turn to the dangerous kolbar occupation when they become unemployed. Kolbars carry heavy loads on their back across Iran’s western borders and are soft targets for the regime’s border guards.