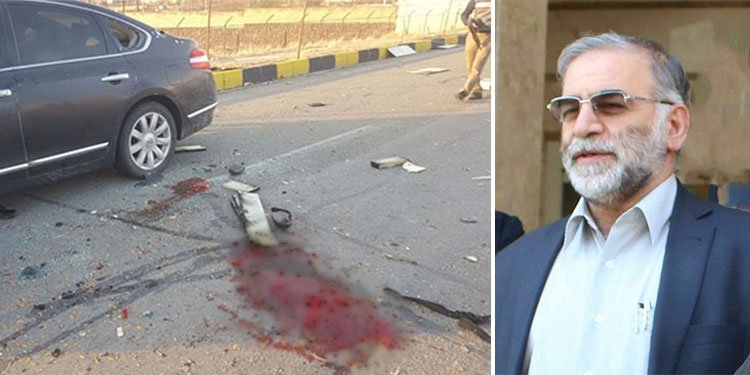 Since the death of Iran’s “father of nuclear” weapons several conflicting narratives on how the assassination was pulled off have emerged from semi-official Iranian sources.  Mohsen Fakhrizadeh, who some call the nuclear equivalent to Qasem Soleimani, the second most powerful man in Iran, was assassinated on Friday, November 27 while traveling in his car in Absard, a small city just east of Tehran.

Though the narratives of his assassination differ, from the involvement of a 12 person team to the use of a satellite controlled machine gun without the presence of an actual hit team, they all claim that Israel was behind the death of Mohsen Fakhrizadeh.

In a report published a few hours after the assassination, the IRGC affiliated Fars News Agency said Fakhrizadeh’s car entered Absard along with two other cars used by his bodyguards at around 2 pm local time. The report said the cars stopped after being attacked by a barrage of bullets. Fars said a “Nissan truck full of logs exploded and sent debris flying 500 meters” damaging nearby electricity poles and transmitters.

With the explosion, “individuals started shooting from unknown locations at Fakhrizadeh’s car and one of his bodyguards places himself in the barrage of bullets trying to protect him”. But this does not stop the bullets from penetrating the man behind the regime’s rogue nuclear weapons program.

In Fars’s initial narrative, the assailants flee the scene after the shooting.

“Immediately after the attack, Fakhrizadeh is transferred to the Absard medical clinic and after 30 minutes, is taken to a hospital via a helicopter,” the November 27 report said.

However, the IRGC affiliated news agency changed its narrative two days later. In this report, there were no assailants and Fakhrizadeh was attacked by an automatic gun that was remotely controlled.

“In this operation, which lasted around three minutes, there were no human elements at the scene of the assassination and the shootings were carried out by automatic guns,” the news agency said on November 29, adding that only one of Fakhrizadeh’s bodyguard were injured in the attack.

The report also claimed that the owner of the Nissan had left the country on October 29.

According to Fars, Fakhrizadeh was travelling in a bulletproof car along with his wife. This time, there were three other cars with him travelling from Rostam Kala in the northern province of Mazandaran to Absard.

The report said Fakhrizadeh exited the car after it was hit by bullets. “He thought they had hit a barrier or were having engine problems.”

After he leaves the car, a remotely controlled automatic gun on the Nissan truck which was 150 meters away fires a barrage of bullets. “Two bullets penetrate his side and two penetrate his back which leaves him with a spinal cord injury.”

At that moment, his bodyguard blocks the barrage of bullets and is also hit. Then the truck bomb explodes.

Iranians on social media have ridiculed Fars’s new narrative, posting an image of what looks like a “Transformers” Nissan truck on social media. Some say Fars changed its story to avoid the embarrassment of the regime not being able to capture any of the assailants.

Another account by an Iranian documentary filmmaker close to the Islamic Revolutionary Guards Corps, claims there were 12 assailants.

According to Javad Mogouie, the booby-trapped Nissan truck armed with an automatic gun was parked under an electrical transmitter. “On the other side of the boulevard, a Hyundai Santa Fe with four passengers in addition to four motorcyclists and two snipers were waiting.”

“The Nissan truck suddenly explodes via a remote control. The 12 shooters in the Hyundai Santa Fe and motorcycles start shooting and Fakhrizadeh’s bodyguards take fire,” Mogouie wrote in a piece published by Iranian websites.

Mogouie stressed that none of the assailants were arrested or killed. According to the documentary filmmaker the power had been cut off in the area thirty minutes prior to the attack and the street’s security cameras were not able to record any footage.

According to Mogouie, a “12 person hit team needs at least a backup team of 50 people.”

He also said the assailants had exact information about Fakhrizadeh’s plans, including the fact that he was in his holiday villa with his family and the exact time and route he would take to travel back.

Head of the Parliament’s Energy Committee

On November 29, Fereydoon Abbasi, the head of the Parliament’s Energy Committee who survived an assassination attempt in 2010 with severe injuries said the assailants intended to kill Fakhrizadeh with the car bomb.

Quoting Fakhrizadeh’s bodyguards, he said the assailants wanted to “direct Fakhrizadeh’s car next to the parked Nissan truck and then set off the bomb.”

According to Abbasi, when the assailants “start shooting, Fakhrizadeh stops the car a distance from the Nissan truck and gets out of the car, when a bullet penetrates his shoulder.”

The bodyguards in the car behind him then get out and cover him and take fire. When his bodyguard, Hamed Asghari, who was shot three to four times, moves away, Fakhrizadeh is shot. Then the Nissan explodes.

“The bodyguards sustain blast injuries from the explosion… and they do not see clearly.”

Abbasi said after the explosion, the snipers, armed with gun mounted cameras, were able to target Fakhrizadeh from a distance.

All the narratives say Fakhrizadeh’s wife was in the car with him during the attack. After her husband’s death, she participated in a short, dictated interview, without revealing the details of the attack. Only her eyes were seen during the interview and most of her face was covered by a large mask.

In a recent interview with the IRIB’s Ofogh channel, Shohreh Pirani, wife to Daryoush Rezaeinejad who was assassinated in the summer of 2011, said Fakhrizadeh was driving when attacked.

“During the attack, Fakhrizadeh was driving. After the initial shots to the car, he stopped the car and got out to get to his bodyguards’ car and was shot in the shoulder,” she said quoting Fakhrizadeh’s wife.

She also said signs of injuries were evident on his wife’s face and body. The IRIB has since removed the interview from its website.

Iranian officials have yet to provide an official report on the details of the attack which led to the death of Mohsen Fakhrizadeh a few kilometers from Iran’s capital.

Three days after the attack on Sunday night, the Ministry of Intelligence announced that they “had leads on the elements of the attack” but that “additional information” would be provided in the future. 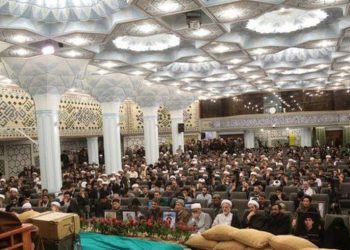