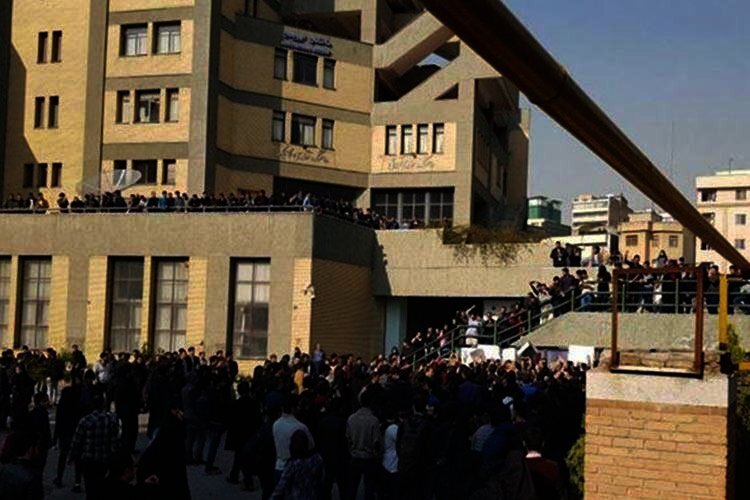 A large group of students gathered on Tuesday in Tehran’s Amirkabir University of Technology, known in Iran as Polytechnic University, in support of recent workers’ protests and clashed with pro-government Basij students who were brought to the scene to counter their protests.

The Amirkabir University students chanted “detained workers must be released,” in relation to two recently detained worker activists of the Haft Tappeh Sugarcane Factory, Esmail Bakhshi and Ali Nejati, who were detained during the weeks long strike of the sugarcane workers.

The students also chanted, “Jailed students must be released”, “Down with the deceitful government”, and “Cannons, tanks and guns are no longer effective” in suppressing dissent.

Holding up signs that read, “Jailed teachers must be released” they also demanded the release of jailed teachers including Mohammad Habibi who is currently serving his more than seven years of prison.

Fearing the spread of protests ahead of Iran’s Student Day on December 7, the university’s pro-government Basijstudents were brought to the scene to counter the protests.

The Basij forces chanted, “Monafegh (derogatory term used for the MEK), seditionist, we congratulate your unity” while verbally attacking the students.

Reports indicate that scuffles broke out between the two groups when the students refused to back down in the face of the counter attacks.

Other reports indicate that students of Tabriz’s Sahand University in northwestern Iran and the Babol Noshirvani University of Technology in central-northern Iran held separate gatherings at their universities.

These protests come ahead of December 7 which marks Student Day in Iran, the anniversary of the murder of three Tehran University students on December 7, 1953 by Iranian police in the Pahlavi era.