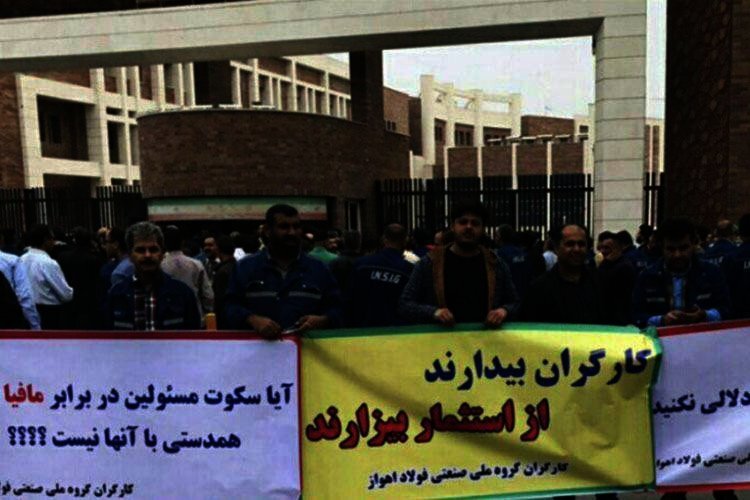 On Monday, Iran National Steel Group workers rallied and marched for the 24th day on the streets of Ahvaz, a city in the southwest of Iran and the capital of Khuzestan province.

The Iran National Steel Group workers started rallying in November in protest to not having received several months of their wages.

The workers were holding signs that read “The workers of Ahvaz are awake and fed up with being exploited” and “Don’t make workers the victims of mafia schemes.”

Officials recently announced that two months of the workers’ wages were given to them but workers told ILNA news agency yesterday that the wages of around 120 workers were paid and that the more than 3,500 workers of the factory who were on strike had not received their wages.

Reports indicate that a number students also joined the workers’ rally holding signs that read, “We’re the workers’ children; we’ll stand by their side.”

The ongoing protests of the Iran National Steel Group and the Haft Tappeh Sugarcane Factory workers has drawn solidarity from people all over Iran.

Students of the Razi University in Kermanshah gathered holding signs in support of striking workers and demanded the immediate release of Haft Tappeh Sugarcane Factory workers’ representative, Esmail Bakhshi, who was detained and tortured by security forces on November 18.

Reports from Tehran indicate that depositors who have lost their life savings to the Caspian Finance and Credit Institutions gathered outside Iran’s Parliament today.

The angry men and women chanted, “We don’t want empty promises, we want our money.”

The Caspian Finance and Credit Institution is one of the largest in a long series of failures of Iranian financial institutions in recent years resulting in the destruction of the savings of thousands of people in Iran.

“Many of the institutions, including those that merged in 2016 to form Caspian, were allowed to gamble with deposits or run Ponzi schemes with impunity for years,in part because they were owned by well-connected elites: religious foundations, the Islamic Revolutionary Guards Corps or other semiofficial investment funds in the Iranian state,” the NYT wrote.

in Dezful, depositors of the Vermicompost Sabz Ab Company also gathered and rallied demanding their money. Despite reports on state run media that the heads of the company were prosecuted for embezzlement and received prison terms, reports indicate that they were subsequently released on bail and did not repay a cent of the depositor’s money.

A number of people with disabilities also gathered outside of the Planning and Budget Organization offices in Tehran to mark the International Day of Disabled Persons and protested the low budget allocated for the disabled in 2019.

The disabled men held signs that read, “Where is our budget?”