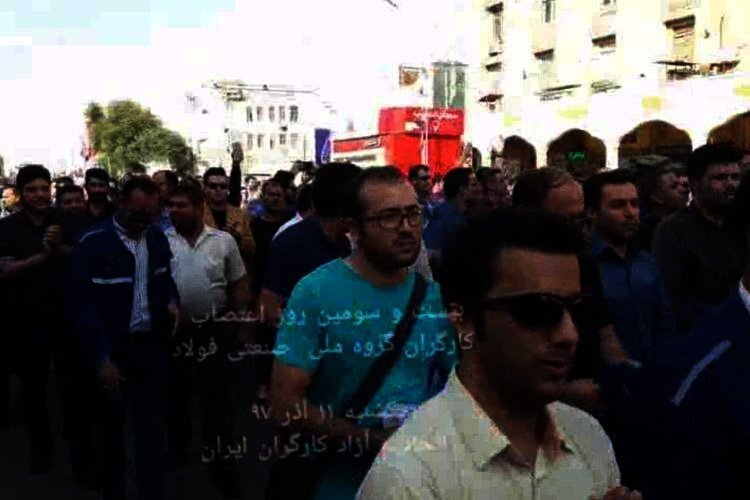 On Sunday, Iran National Steel Group workers rallied and marched for the 23rd day outside of the Khuzestan governor’s office in Ahvaz.

The Iran National Steel Group workers started rallying in November in protest to not having received several months of their wages. Most of the workers are the sole breadwinners of their families.

The workers were holding signs that read “The workers of Ahvaz are awake and fed up with being exploited” and “Don’t make the workers the victims of mafia schemes.”

The large number of angry workers chanted slogans in unison, condemning the condition of workers in Iran while also targeting the whole regime with their political chants.

“You’ve taken advantage of Islam and have made the people miserable,” the workers chanted addressing the government.

“They speak of Hossein but pride themselves in thieving,” they chanted referring to the grandson of the Prophet Mohammed, a revered symbol for Shiite Muslims.

Both slogans are aimed at the Iranian government as workers believe that it has taken advantage of religion to rob Iranians of their wealth.

The Iran National Steel Group workers also called for the immediate release of workers of the Haft Tappeh Sugarcane Factory who were detained during the ongoing Haft Tappeh workers’ strike.

“Haft Tappeh prisoners must be released,” they chanted.

Reports indicate that Mr. Bakhshi, who has been in prison for more than two weeks, was tortured and severely beaten upon his arrest.

Mr. Nejati, who was detained on November 29 after security forces raided his home beating him and his family, is suffering from a heart condition and there are concerns that the incarceration would aggravate his illness.

“All workers are a family,” the Haft Tappeh representative told the workers.

The Iran National Steel Group workers also chanted, “Steel workers will fight against tyranny and injustice”, “down with tyrant, viva workers”, “down with the deceitful government”, “abandon Syria and think of us”, and “our country is a thieve house and is one of a kind in the world”.

The workers are continuing their protest rallies despite threats from Iran’s Chief Justice.

“Those who want to use the pretext of following up workers’demands and disrupt the order of the country, should be dealt with,” Sadeq Larijani said in comments carried by the IRNA state-run news agency on November 26.

“The enemy is looking to take advantage of some of the demands and workers should not allow their demands to become grounds for or an excuse for the enemy and disorder in the country,” the cleric added in a meeting with Iran’s top judicial officials.

“Demands will never be met with sedition, crises and measures that are against public order,” he said.

“The fact that some people bring up excuses and disrupt the order of the country is unacceptable,” Larijani added.

The Iran National Steel Industrial Group, a lucrative complex established in 1967 during the Shah’s reign, has a 4,000-strong workforce.

The factory soon became idle under the new owner and stopped paying its workers’ salaries, which led to numerous protests. Workers complained that Mousavi did not intend to keep the factory running, and alleged that equipment was being removed from the complex.