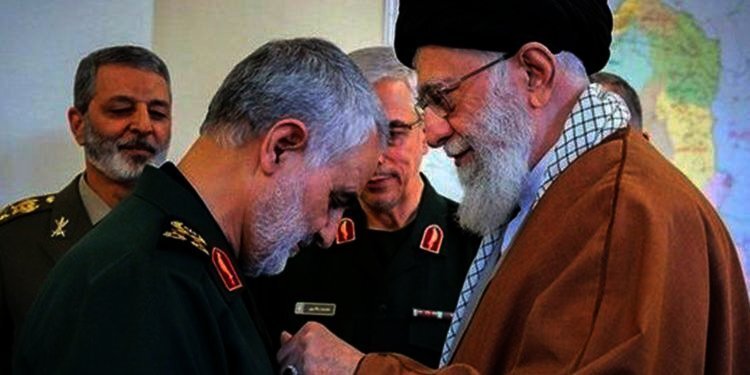 Around five years ago when Qasem Soleimani, the Commander of the Quds Force, was at the top of his game, an Iranian state-run website wrote that only “Batman, Superman, and Spiderman” would be able to take him out. As it turned out, the general, responsible for the death of thousands of Iranians, Americans, Iraqis and Syrians, was not invincible after all.

In the early hours of January 3, Soleimani was killed in a targeted US air strike at Baghdad airport.

The first is domestic suppression which has been systematically implemented for the past 41 years. The last brutal suppression was in November 2019 when thousands of Iranians took to the streets in at least 190 cities demanding change. Fearing its downfall, the regime killed at least 1,500 civilians on the streets and later in prison on Khamenei’s direct orders. But Khamenie failed in actually stifling protests and the growing anger of Iranians who are just waiting for an opportunity to bring down the regime.

Khamenei’s second strategy is its influence in regional countries which it wields through terrorism. Qasem Soleimani was Khamenei’s right hand man for this strategy. Soleimani was so prized that in 2019, Khamenei decorated him with the “Order of the Zolfaghar”, Iran’s highest military honor, to thank him for his achievements as the Commander of the Quds Force, an IRGC division primarily responsible for extraterritorial military and clandestine operations.

Soleimani was a key player in Khamenie’s terrorist activities in the region. He was constantly travelling to and from Iraq and Syria strengthening the link between the regime and its proxies. Without him, mending this broken link will be a challenge for Khamenei as his death has dealt a hard blow to Iran backed militias who saw him as their “hero”.

The Iranian regime intentionally created tension in the region in the past few months, trying to blackmail the international community by attacking a US surveillance drone in the Strait of Hormuz and Saudi oil facilities. Both attacks were left unanswered.

The last straw was its attack last week on an Iraqi military base in Kirkuk that killed an American contractor and injured several more. The death of the contractor led to direct American assault on an Iran-backed militia in Iraq.

That, in turn, prompted an attack on the U.S. embassy in Baghdad by Iran-backed militia groups who openly chanted in favor of their “commander” Qasem Soleimani.

According to the Washington Examiner, Trump reportedly made the decision to take out Soleimani after the U.S. Embassy attack.

The regime’s miscalculated the US’s response to its attack on the US embassy and previous missile attacks in Iraq, aimed at derailing Iraq protests which called for the expulsion of Iran and its proxies. Not only was it not successful in diverting Iraq protests, it lost what some called the regime’s irreplaceable “number two” man.

With ongoing protests which have effectively turned Iran into a powder keg, many believe that the death of Khamenie’s key player in its regional terrorism strategy has heralded the downfall of the Iranian theocracy in 2020.

Soleimani's funeral: The hallmark of a theocratic propaganda machine