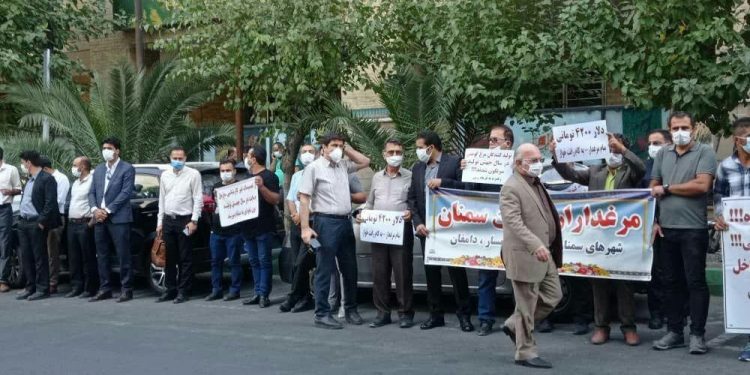 According to collected reports by sources affiliated with the Iranian Resistance, September Iran protests amounted to 358 recorded protests in 87 cities, with an average of 12 protests a day.

There was an increase in the number of protests compared to August when 331 protests were recorded. Iranians protested in September to express their economic grievances and demand their unpaid wages.

Several protests were organized, such as protests by pensioners, and some were held for consecutive days. Protesters also traveled to Tehran from other cities to protest in September.

On September 1, Hossein Zolfaghari, Head of the Security and Law Enforcement Department of Iran’s Ministry of Interior said protests calls in the country had increased three-fold compared to last year.

The state-run daily Ebtekar, affiliated with Iran’s President Hassan Rouhani, expressed concern about the recurrence of the November 2019 nationwide protests and wrote on September 6 that Iranians no longer “trusted the regime”.

“It seems that for various reasons, Hassan Rouhani is distancing himself from the people and society. But he and his advisors do not mention that this could be the end of people’s trust toward the state. They do not realize what consequences this behavior could have.” Ebtekar said “the president’s advisors who are well-experienced intelligence men” should take note of “what has happened since November 2019 until today.”

In late September, state-run media warned that Iranians’ widespread mistrust of the regime would turn into nationwide protests because the regime was ignoring the people’s demands.

“The subverters will dwell in this split and will allow themselves to try to overthrow the government and take power,” Bijan Abdolkarimi added.

Referring to the major protests in November 2019 which shook the country, he said “we will definitely see more of these protests” in the future.

“I think the political power in the country has not been able to meet the people’s demands,” Abdolkarimi added.