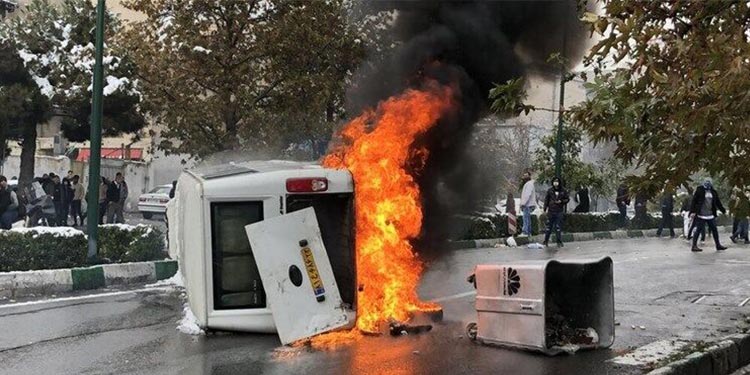 A senior judicial official in the central city of Isfahan said that eight protesters who had participated in Iran’s 2019 nationwide protests could be sentenced to death. Mohammed Reza Habibi said yesterday that the protesters’ final verdict was “corruption on earth”.

While the Chief Justice of Isfahan did not specifically use the term “death sentence”, the regime’s Islamic Penal Code, chapter 9 considers the death sentence for “corruption on earth”.

According to Article 286, “any person, who extensively commits felony against the bodily entity of people, offenses against internal or international security of the state, spreading lies, disruption of the economic system of the state, arson and destruction of properties… [on a scale] that causes severe disruption in the public order of the state and insecurity… shall be considered as mofsed-e-fel-arz [corrupt on earth] and shall be sentenced to death.”

Habibi announced the sentences during a speech before yesterday’s Friday prayers sermon in Isfahan without naming the protesters.

He also warned Iranians that if major protesters such as in 2009, January 2018 and November 2019 erupt again, we will “deal decisively with rioters”.

In 2009, protests erupted in Iran’s major cities against election fraud. In nationwide protests that broke out in late December 2017 and continued into January the next year, Iranians took to the streets to demand their economic woes, although the protests quickly turned political with protesters chanting against the regime’s Supreme Leader. Last year in November, a fresh round of protests erupted after the government tripled the price of gasoline overnight.

The regime responded by fatally shooting at least 1,500 men, women, and children in the span of only a few days amid an internet blackout.

According to the Isfahan Chief Justice, the regime’s enemies are banking on protests to overthrow the regime.

Habibi said that “the enemy is after igniting the flames of sedition” and that “they have based their hopes on internal quarrels.”

He also warned workers and employees from carrying out protests to demand their wages and expressing their economic grievances.

Habibi said that “demands should be requested within the scope of the law” and that workers and employees “should get permits from the authorities and protest in specified areas, otherwise it will get out of hand and result in riots such as in November 2019.”

Iranian workers and government employees carry out gatherings all over Iran every day, mostly to demand their unpaid wages.

Many workers and activists have been sentenced to prison terms, lashes or have been lashed during the last couple of months. Despite this, protests continue.

Habibi’s announcement comes three days after the death sentence for three young protesters in Tehran was upheld by the Supreme Court. Amir Hossein Moradi, Saied Tamjidi and Mohammad Rajabi who are all in their mid to late twenties were sentenced to death after Branch 15 of the Revolutionary Court in Tehran convicted them of several charges including “enmity against God” (moharebeh).