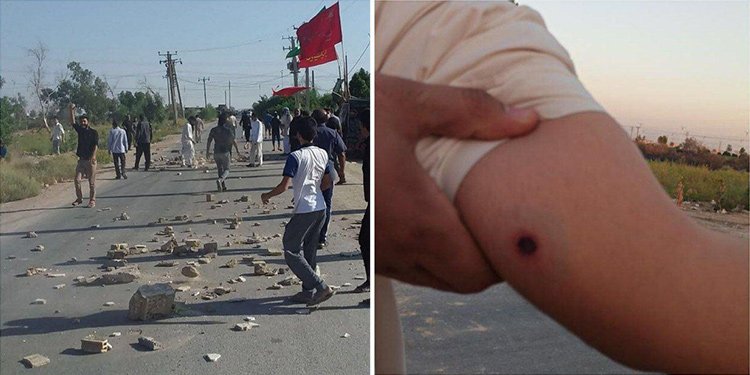 Security forces attacked locals in a southwestern Iranian village with tear gas and pellet guns yesterday, injuring locals. Locals were defending their village from security forces who wanted to demolish their homes on orders of the Mostazafan Foundation, a “charity” bonyad, owned by the regime’s Supreme Leader.

Videos on social media showed villagers throwing rocks at security forces and riot police in Hazrat-e Abolfazl village near Ahvaz on Wednesday in an attempt to prevent the demolition. Security forces responded with tear gas and shotguns. The village, home to 300 families, is to be demolished by the Mostazafan Foundation, one of Iran’s wealthiest bonyads. Many of the homes in the village have already been demolished.

Amateur videos on Wednesday showed injured villagers, including children, with pellet gun punctures on their hands, feet, and body. Reports indicate that dozens of locals were arrested.

The Mostazafan Foundation claims to own the 25 hectares of land and is forcing the residents, who have lived there for decades, to leave their homes.

Following the widespread publication of videos of the attacks on social media, the Ahvaz Assistant Prosecutor confirmed the clashes but said that security forces “shot in the air”. This is while the Ahvaz Chief of Police completely denied the shootings.

Assistant Prosecutor Ali Biranvand accused the locals of “the illegal ownership of lands belonging to the Mostazafan Foundation” and “land grabbing”.

“The law enforcement officers present on the scene fired several shots of rubber pellets to control the situation and prevent casualties, and some people took advantage of this and edited the videos to show the opposite of what took place,” he added.

The Assistant Prosecutor said that the police left the village after clashes, but said “this does not mean that the corrupt people who are involved in land grabs will not be dealt with”.

Despite the local’s evident pellet gun injuries on the videos, Mohsen Dalvand, the Ahvaz Chief of Police denied “any kind of shooting at locals in the village” and said that the images were “fabricated”.

Dalvand also threatened those who had posted the videos.

“We warn the publishers of these images to refrain from publishing any news and rumors that disturb public peace, security, and public opinion because the Cyber Police is monitoring them.”

According to the Shargh state-run daily, locals have documents dating back to 1985 that indicate that the villagers have lived in the area for nearly 40 years. The Mostazafan Foundation has now obstructed the minimum services that were provided to the villagers.

“These villagers are the ones in need of help. The charity foundation is supposed to help those in need. They have land all over Iran. They have villas in Tehran according to videos. Why do they insist on taking this land?” The village’s Friday Prayer Imam, Seyed Yousef Mousavi told Shargh.

The Shargh report said that the residents had populated the land in Zarddasht because they were given facilities such as agricultural water during the early ‘80s and cultivated wheat, barley, and vegetables. The water was cut off after a town was constructed in Zarddasht in the ‘90s and forced locals to abandon farming. However, the residents continued to live in the village for two generations.

Iran’s Mostazafan Foundation is a multi-billion-dollar financial conglomerate operating under the tutelage of Ali Khamenei, the regime’s Supreme Leader.

During the past four decades, the Mostazafan Foundation, or the foundation for the oppressed, confiscated homes, mansions, factories, lands and financial institutions belonging to Iranians deemed opponents of the regime or affiliated with the Shah. It was initially founded to aid impoverished Iranians but like many other organizations under the thumb of Ali Khamenei, its actual function is to “aid” regime officials.

Most of the real estate at the disposal of the Mostazafan Foundation are being used by high-level officials.

In an August 16 interview with a state-run daily, a top Iranian official and member of the regime’s Expediency Discernment Council confirmed the foundation’s corruption.

Ahmad Tavakoli said that the assets of the biggest holding company in the Middle East have been used for officials and regime organizations instead of being used for impoverished Iranians, as was originally intended.

Iran’s bonyads answer only to Khamenei and are exempt from taxes.