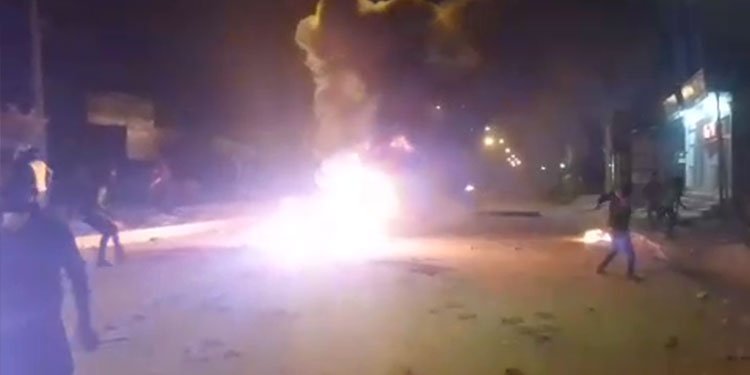 Snapshot of video of clashes in Delfan.

Iranian security forces fired shots into the air during a clash with locals in western Iran on Saturday night when met with resistance while trying to arrest protesters.

According to local reports, security forces had entered Barkhordar Village, in Khaveh District, to arrest locals who had taken part in a protest on Saturday morning in Delfan. Locals clashed with security forces in an attempt to prevent the arrests.

On Saturday morning, hundreds of locals in Delfan, Lorestan Province, took part in a protest gathering against a local sand and gravel factory demanding it cease its activities.

They say that the factory is destroying natural resources in the Garrin Mountain. Locals also complain that the loud sound of explosions in the mountain by the factory is disruptive. The report said that protesters were able to cease the factory’s activities.

Lorestan officials have yet to comment on the incident. Khaveh District, located in Delfan, has 53 villages and became a district in 2013.

The Iranian regime does not tolerate peaceful protests and uses force against protesters. On May 23, security forces shot pellets and rubber bullets at locals in Gheyzaniyeh, southwestern Iran, who had gathered to demand clean drinking water. Several people, including a teenager, were shot and wounded.