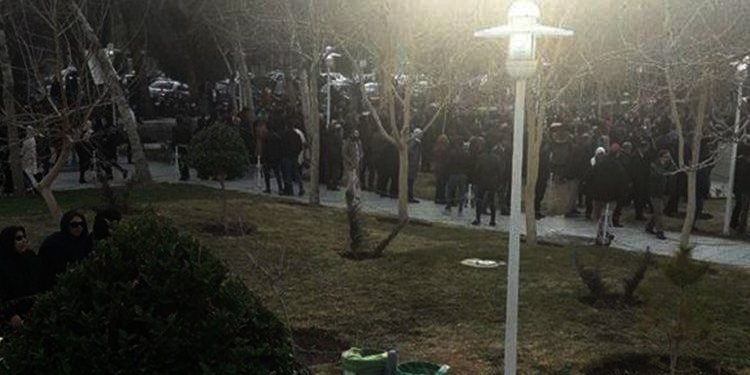 Security forces attacked a peaceful gathering by hundreds of people including teachers near the Zayanderud River in the central city of Isfahan.

The protesters had come out to demand that the government refrain from once again diverting Zayanderud’s water to other areas which had left the river completely dry.

The water flowing into Zayanderud was temporarily opened by the government after hundreds of protests by Isfahan farmers who depend on the river for their crops and livelihood. Videos on social media showed water flowing once again after around nine years under the famous Khaju Bridge with people rejoicing around the bridge and one man even kissing the ground in joy.

However, the opening of the water into Zayanderud is temporary and protesters came out today to demand that the water be allowed to permanently flow into the river.

Report indicate that many of the protesters were Isfahani teachers who had asked all resident of Isfahan to join the rally. Pictures showed them holding up pictures of jailed teachers demanding their release.

The protesters chanted, “A nation has never seen such injustice”, “Teachers would rather die than face dishonor”, and “Our enemy is right here; they lie when they say it’s the US”, meaning that the people believe that their enemy is the regime and not the US.

According to reports, security forces attacked the peaceful rally with tear gas and pepper spray to disperse the crowds. The protesters chanted “Don’t be afraid, we’re all together” and “We are teachers not criminals” in return.

The Iranian regime cannot tolerate even peaceful protests afraid that they would lead to larger political protests challenging its rule.

According to Amnesty International more than 7,000 protesters were arrested in 2018.

40 year legacy of the Islamic Republic of Iran – Addiction