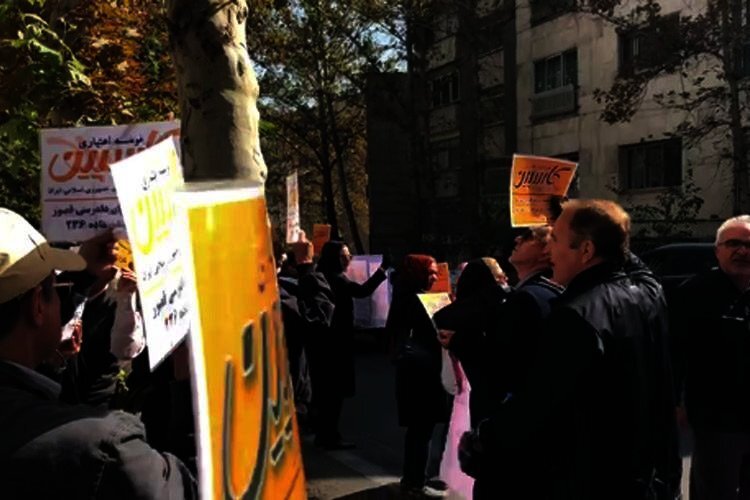 According to reports from Iran, there were four gatherings in various Iranian cities yesterday and today in protest to the dire state of the economy.

Taxi drivers in Marivan, Kurdistan Province held a protest gathering yesterday in protest to low fares. They gathered outside the city’s Municipality Office.

The drivers said that they could not live on the current fares they received.

They also said that they had to use a large part of their income on car expenses and could not provide for their families with the little that was left. The taxi drivers said that their customers had decreased due to the overall financial problems of the people. They asked the Municipality to look into their grievances. The gathering was also covered by ISNA state-run News Agency.

A group of depositors who lost their life savings to the Caspian Finance and Credit Institutions also gathered outside the Tehran Center of Judiciary Experts yesterday.

Caspian Finance and Credit Institution is one of the largest in a long series of failures of Iranian financial institutions in recent years resulting in the destruction of the savings of thousands of people in Iran.

“Many of the institutions, including those that merged in 2016 to form Caspian, were allowed to gamble with deposits or run Ponzi schemes with impunity for years, in part because they were owned by well-connected elites: religious foundations, the Islamic Revolutionary Guards Corps or other semiofficial investment funds in the Iranian state,” the NYT wrote.

A group of depositors in Mashhad also gathered today outside of the Mashhad Revolutionary Court. They chanted, “Liar Rouhani, where is our money”, “A nation has never witnessed such injustice”, and “Iranians wake up, Iran has no laws.”

The Iranian Central Bank claims that the grievances of more than 95% of the depositors has been addressed.

In Ahvaz, workers of the Green Space Organization of the 1st District of the Ahwaz Municipality went on strike in protest to not being paid their wages.

They said that they had not received their wages for months and that many of them, despite having 10 years of work experience at the organization, were having trouble renewing their health insurance.

These workers had in the past gathered outside the Municipality, City Council and the Ahvaz Governorates Office in protest to not receiving wages.

Poverty forces more people to dig through garbage in Iran

Poverty forces more people to dig through garbage in Iran

No escape from Iran oil sanctions