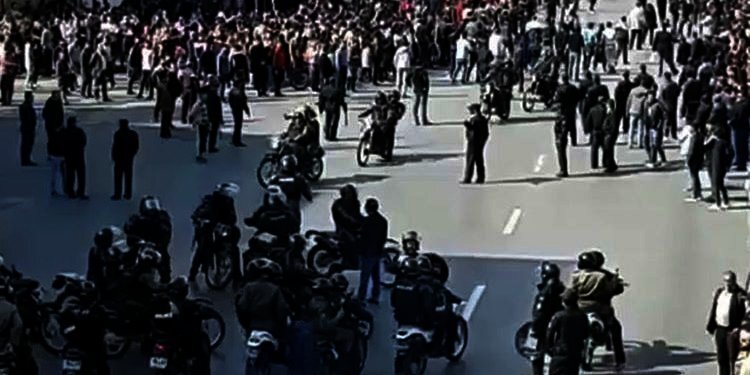 Snap shot of video of protests in Shiraz from VOA Persian.

The report said that 400 women and 17 teenagers were among those killed after security forces opened direct fire on protesters on orders of the Supreme Leader Ali Khamenei who told top officials to “do whatever it takes to stop” protesters.

On December 15, the National Council of Resistance of Iran announced that at least 1,500 protesters and civilians were killed during the protests which spread to more than 180 cities in just days.

Reuters said that “three Iranian interior ministry officials” confirmed the death toll adding that they were based on information gathered from security forces, morgues, hospitals and coroner’s offices.

Iranians officials refuse to officially announce how many civilians were killed during Iran’s nationwide protests.

“The number of those killed during the incidents of November will be announced after thorough investigations and after they are separated (into various groups)”, Montazeri, Iran’s chief prosecutor said on December 20.

By various groups, Montazeri means that they are classifying slain Iranians into protesters and non-protesters to claim that the regime did not indiscriminately gun down Iranians on the streets.

“The enemies wanted to topple the Islamic Republic and immediate reaction was needed,” a source told Reuters about the need to use lethal force against protesters.

Regime officials live in constant fear of fresh protests and there are concerns that they will once again enforce an internet blackout in case of widespread protests.

The high death toll and brutal crackdown campaign has not deterred Iranians who are once again calling for nationwide protests on December 26 which marks the 40th day of the death of protesters. The “40th day after death” is traditionally commemorated by Iranians as a day of mourning.

The calls for gatherings and protests initially came from the parents and families of slain protesters and were echoed by others all over Iran.