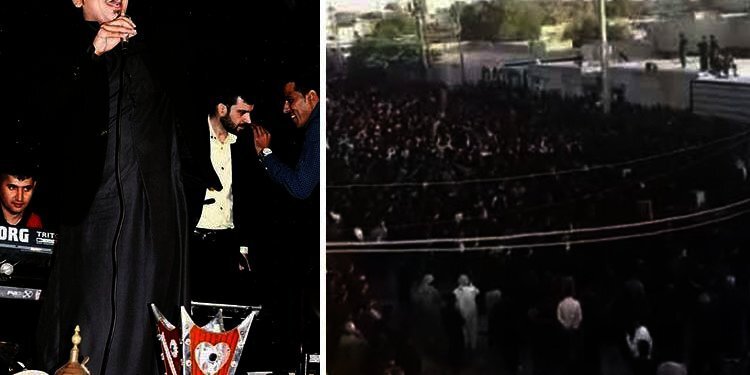 Following his death, hundreds of Arab-Iranians, who blamed the regime for the death, took to the streets in Ahvaz, Kut Abdollah and Shadegan to demand answers.

The mass protests started last night and continued today. Supporters of the Arab-Iranian poet also held mourning ceremonies for the young poet with a number of people shooting live bullets in the air, as is customary among Arab-Iranians.

There were reports of skirmishes between security forces and protesters.

One video showed protesters in Kut Abdollah pulling down the flags of the Iranian regime from flag poles.

According to human rights groups, a number of people were detained during Hassan Heidari’s burial ceremony including a local singer identified as Abbas Sahagi. The report said that he was detained because he recited “protest poems” during the ceremony.

A number of other people at the burial ceremony were also arrested though they have yet to be identified.

Sources say that Hassan Heidari was taken to the hospital by his family in the middle of the night after complaining of feeling like he had been poisoned. His condition became critical yesterday morning and his family was told that he had a fatal heart attack as a result of being poisoned.

According to the source, his family said that Hassan was healthy and did not suffer from any illnesses. They blamed the Iranian regime’s security institutions for his death.

Heidari had been detained last year over the protest nature of his poems.

Khuzestan, home to an ethnic Arab minority, has been the scene of unrest and state crackdowns in the past.