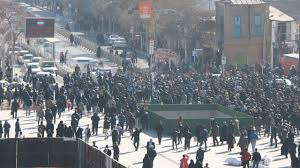 The Chief of Police of Khorasan Razavi said that calls for protests have tripled in the northeastern Iranian province. In comments carried by state-run media today, Mohammad Kazem Taghavi said that “calls by the state’s ill-wishers for illegal protests had tripled compared to the past”.

“Although the good record of the Khorasan Razavi police in managing these issues is brilliant,” he added.

The Khorasan Razavi Chief of Police cited impending protests, dubbed a “hot summer” by state-run media, and said that the police would “lead the community into security and peace” to achieve “a cold autumn”.

“To date, there has not been a single day when law enforcement and border guards were not fully prepared,” Taghavi added.

Mashhad, Iran’s second most populous city is the capital of Khorasan Razavi Province. Thirty percent of Mashhad’s 3 million population are slum dwellers who do not have stable jobs and have a difficult time providing their basic needs including food. This makes the city a virtual time bomb.

Major protests on December 28, 2017, started in Mashhad and quickly spread to almost all Iranian cities. Iranians in Mashhad actively took part in the last round of nationwide protests which started in late 2018 and continued into January 2019.

The widespread poverty in Mashhad exists despite the fact that Astan Quds Razavi, a massive business corporation with a real-estate portfolio worth an estimated $20 billion, is located in the religious city.

The charity was originally established to supposedly help the needy and “provide financial grants” to poverty-stricken citizens.

According to a report by the Foundation for Defense of Democracies the endowment presides over more than 100 businesses in a variety of fields, including car manufacturing, agriculture, financial services, construction, and oil and gas, many of which conduct business overseas. It also controls the border between Iran and Turkmenistan, a special economic zone for trade with central Asia.

The Astan Quds Razavi – Farsi for “the holy belongings of Imam Reza” – manages the Imam Reza Shrine, a vast complex in Mashhad that includes the world’s largest mosque by area, a library, and other religious institutions devoted to the memory of the eighth Shiite imam. Some 25 to 30 million pilgrims visit the shrine annually, making Mashhad the country’s most popular tourist attraction. Astan Quds Razavi also owns nearly half of the land in Mashhad, Iran’s second largest city.

The FDD report, titled “Profiles of Iranian Repression”, which was published in 2018 said that the endowment received no oversight by any other government body, undermining any attempt to determine its full size and impact.