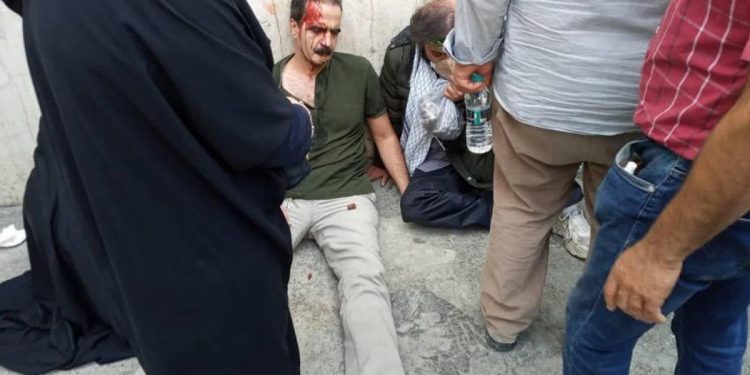 According to collected reports by sources affiliated with the Iranian Resistance, October Iran protests were at least 341 recorded protests in 83 cities, with an average of 11 protests a day.

Iranians protested in October despite economic pressure and the COVID-19 epidemic.

Other sectors of the society held 62 protest gatherings in 32 cities. Amongst prisoners, there were seven hunger strikes, five of which were individual hunger strikes.

In some cases, protesters travelled to Tehran from other cities to express their economic grievances in the capital. Several protests were held for consecutive days, such as the oil workers protests. Many of the protests were held by women.

Retired oil industry employees and war veterans gathered outside the Oil Ministry on October 26 to protest the non-implementation of parliament approved orders. Police forces attacked the protesters, beating and injuring them.

The pensioners who are war veterans of the Iran-Iraq war gathered to demand their unpaid wages.

There were similar protests held outside the Oil Ministry before this, in the past two months.

Stock market investors who have lost money gathered on October 26 outside Iran’s parliament to protest the regime’s economic policies.

Municipality workers in Ahvaz, southwestern Iran marched on the streets on October 18 to demand 15 months of their unpaid wages.

Fifty firefighters gathered on October 13 in Abadan, southwestern Iran to demand two months of their unpaid wages and benefits.

In the second week of October, nurses in Ahvaz gathered to protest the decrease of their wages and benefits.

Nine protests in the span of two days

In the third week of October, nine protests were held in the span of two days by Iranians who came to express their economic woes, and demand their unpaid wages.

On Sunday and Monday, Iranians in Tehran gathered to protest the regime’s “family laws” outside the Islamic Consultative Assembly Building, while party and wedding hall owners and employees gathered outside the Tehran Guilds Chamber. In Dehdasht, southwestern Iran, firefighters gathered outside their office building to demand their unpaid wages. Oil industry pensioners gathered in Ahwaz, and Isfahan, central Iran to express their economic grievances while defrauded car buyers gathered in East Azerbaijan, northwestern Iran to demand their cars.

Beetroot farmers gathered in Naqadeh, northwestern Iran outside the Soldoz Sugar Factory because the factory did not hold its end of the contract and had not paid the farmers. A group of Razi Petrochemical Company workers in Mahshahr, southwestern Iran also gathered outside the company building to demand their wages.