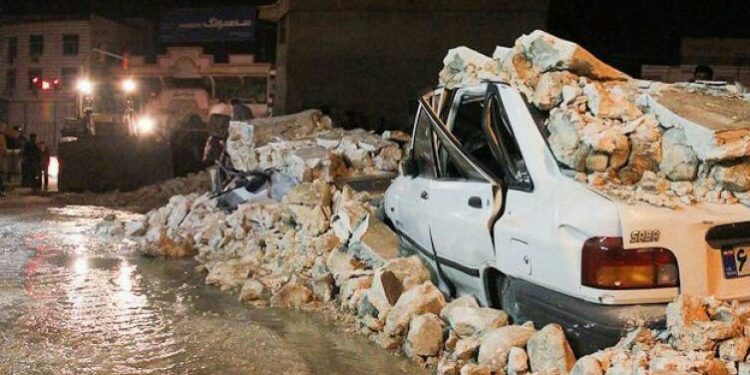 Angry locals in Sisakht, southwestern Iran protested the downplaying of earthquake damage by officials and state-run TV, following a 5.6 earthquake that left many homes in ruins.

The earthquake rocked the southwestern city of Sisakht and surrounding villages on the evening of February 17. State-run news agencies announced 64 injuries yesterday, 25 of which were transferred to hospitals. The earthquake affected a diameter of 10km from its epicenter.

A local website said officials downplayed damages when giving initial reports to the state-run IRIB TV. The report criticized authorities for their estimates.

“The remarks of crisis officials is strange because from the beginning it was clear with a quick look and a little familiarity with Sisakht that the damages were severe.”

Sisakht locals also protested the method of aid and tent distribution. Locals said they witnessed people coming to get the equipment who were not residents of Sisakht.

“Sisakht is not very large, why don’t authorities just drive into the streets and check the homes that need help and give it to them?” locals said.

Videos on social media showed men and women huddled around fires on the streets in subzero temperatures. Another video showed an angry man who said no one had come around to aid them.

Other locals who were stranded under the snow said they did not know where the 5,000 tents that were supposed to be distributed had gone.

According to the Crisis Director of Kohgiluyeh and Boyer-Ahmad Province, Mohammad Mohammadi, many homes were damaged.

“Almost all the homes in Sisakht were affected by the quake,” he said.

The provincial authorities and the Mayor of Sisaskht also said the damage to Sisakht and 78 surrounding villages were severely extensive. However, Hossein Janati, the Head of the Kohgiluyeh and Boyer-Ahmad Housing Foundation said yesterday the earthquake had only damaged 2,600 homes.