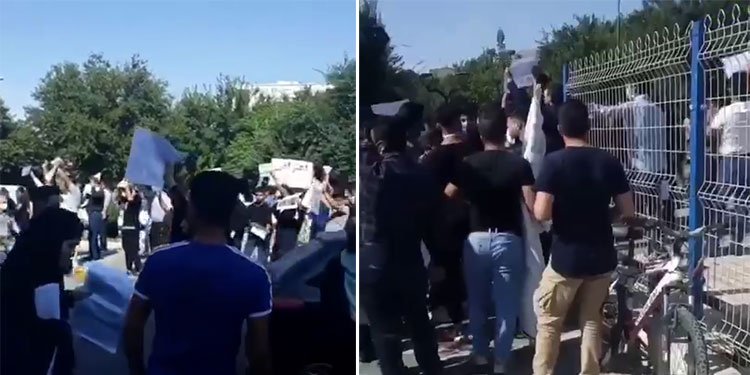 A large number of locals and family members of five Iranian protesters who have been sentenced to death gathered yesterday in central Iran to prevent the executions.

According to amateur videos published on social media platforms, the men and women gathered outside Isfahan’s Nikbakht Judiciary. Some of the protesters were holding signs demanding that the regime not carry out the executions.

This came after reports yesterday that Mehdi Salehi Ghale Shahrokhi, Mohammad Bastami, Majid Nazari Kondori, Hadi Kiani and Abbas Mohammadi had lost contact with their families while in prison.

The protests started this morning when the families of the men gathered outside the Judiciary. The families demanded that their loved ones be tried again with the presence of the media. According to the report, a judiciary official threatened the families during the protest.

“Don’t gather here. It will have bad repercussion for you,” he told them. The families were then attacked by security forces who used force and batons to disperse them.

There were also reports of disturbances in internet connectivity in Isfahan.

There were reports this week that Iran’s Supreme Court had upheld the death sentences of the five men arrested by security forces during the December 2017 and January 2019 protests.

Some sources say each of the men has received two death sentences on charges of “waging war against God” and “baghi” (taking up arms against the government).

Confirming the news, the lawyer of one of the protesters said that the 2nd Branch of Isfahan’s Revolutionary Court had previously sentenced the men to death in February.

According to the indictment issued by Isfahan’s Revolutionary Court, the five Iranian protesters have been charged with “Baghi through effective efforts and activities to advance the goals of the rioters”, “waging war against God through the use of firearms and the intention to disrupt security and shoot at officers” and “corruption on earth by disrupting public security and leading rioters to disrupt public order and security and disturb public opinion.”

The five men, all in their 20s, told the court that they were tortured to make confessions.