The evil precedents of Iran’s Khomeini 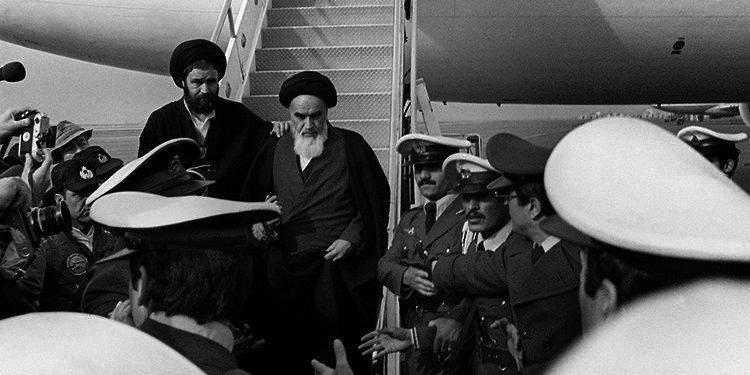 40 year legacy of the Islamic Republic of Iran

The founder of the Islamic Republic of Iran, Ruhollah Khomeini, has set many cruel precedents in Iran. Many of his so-called teachings are still being carried out today and according to one scholar, staying faithful to Khomeini’s ideology has been the litmus test for all political activity in Iran in the last 40 years.

Therefore, despite dying only ten years after the founding of his tyrannical regime, one can draw the conclusion that the 40 years of death, destruction and corruption are his legacy.

Known as a religious leader or marjah before the revolution, Khomeini refused to use his religious authority to oppose the coup against the pro-democracy government of Iranian Prime Minister Mohammad Mosaddegh or the Shah’s crackdown on dissent which led to countless executions. This is while at the time, most Iranians had a deep respect for the Shi’a clergy and tended to be religious and traditional, therefore, the clergy’s religious authority translated into political power.

Instead, he vehemently opposed the 1963 “White Revolution”, a six-point program of reform which called for electoral changes to enfranchise women and allow non-Muslims to hold office among other things. Khomeini viewed this as “an attack on Islam”.

After the revolution, Khomeini famously said that the workplaces was no place for women and that it became “crippled” when women were allowed to work.

“You have allowed women into the office and you can see that in every office that women came to, that office became crippled. When women enter any system, they disturb the situation. Do you want women to provide your independence?” Khomeini said.

But the most evil precedent set by Khomeini was the theory of the welayat-el faqih, the “Guardianship of the Islamic Jurist (clerical authority)”, which was in practice theocratic political rule by Islamic jurists. This principle was appended to the post-revolution Iranian constitution. And of course, Khomeini installed himself as the all-powerful Supreme Leader of Iran.

He won the support of the masses who were disenchanted with the Shah by promising them a popularly elected government that would represent the people of Iran and with which the clergy would not interfere.

He won the support of western powers after he went to France from Iraq. From there, he conveyed his messages to France, Britain, West Germany and the US at the Guadeloupe Conference and stole the leadership of the revolution.

However, once in power, he showed his true colors as the Supreme Leader of Iran. He took a firm line against dissent, warning opponents of his theocracy of a forthcoming crackdown.

“I repeat for the last time: abstain from holding meetings, from blathering, from publishing protests. Otherwise I will break your teeth,” he said.

Khomeini was also the first to espouse the practice of hostage taking in Iran.

He rose to power on anti-American platform and used this slogan to take over the American embassy in Tehran in November 1979. Many believe the real reasons behind the 444 day hostage crisis, was to strengthen Khomeini’s hand in power to suppress the voices of dissent as the clerical rule geared to start its systematic policy of suppression. The first victim of the hostage crisis was the government of Mehdi Bazargan, the first post-revolution Prime Minister of Iran.  He resigned his position as prime minister in November 1979, just four days after the takeover, in protest to the hostage taking and as an acknowledgement of his government’s failure in preventing it.

“Economics is for donkeys”

In a speech given to a huge crowd after returning to Iran from exile on February 1 1979, Khomeini made a variety of promises to Iranians for his coming regime.

He promised that “no one should remain homeless in this country,” and that Iranians would have free telephone, heating, electricity, bus services and free oil at their doorstep.

But only six months after his first speech he expressed exasperation with complaints about the sharp drop in Iran’s standard of living.

“I cannot believe that the purpose of all these sacrifices was to have less expensive melons,” he said mocking Iranians.

When asked about his economic policies, he is known to have said that “economics is for donkeys”.

Because of the Iran-Iraq war, poverty rose by nearly 45% during the first six years of Khomeini’s rule.

The total disregard for the livelihood conditions of Iranian citizens is one of Khomeini’s many destructive legacies, and after 40 years, has left 80% of Iranians in poverty.

After the revolution, dissident groups were allowed to freely voice their opinion for around two years. After that, Khomeini indicated that he had zero tolerance for anyone who opposed his despotic rule.

In 1980, he targeted universities as the epicenter of opposition to his rule and carried out what was known as a “cultural revolution”. Under his orders, the regime initially closed universities for three years (1980–1983) and after reopening, banned many books and purged thousands of students and lecturers from the schools.

“There has to be an Islamic revolution in all of Iran’s universities… So that universities become a healthy environment to teach Islamic sciences,” he said in a March 1980 speech.

He also said that the “intellectual university goers” were “alienated” from the people.

“Most of the deadly blows that have come to this community have come from most of these university intellectuals who have always held others in contempt,” he added. (Islamic Republic daily, March 26, 1980)

Today, universities are still under the tight control of the regime.

At the beginning of the revolution, many democrats disputed a completely “Islamic Republic” and wanted an “Islamic Democratic Republic” instead.

On March 10, Khomeini attacked them in an article in Keyhan daily.

He also said that whoever adds “democracy” to the Islamic Republic is the enemy.

“Those who are trying to bring corruption and destruction to our country in the name of democracy will be oppressed. They are worse than Bani-Ghorizeh Jews, and they must be hanged. We will oppress them by God’s order and God’s call to prayer,” he said on August 30 during a speech in Qom.

In an interview with Keyhan daily in the summer of 1980, he expressed regret over allowing political groups some activism.

“If we had broken the pens of all the mercenary press and closed down all the corrupt magazines and press and put their (editors) on trial and banned corrupt parties and gave their leaders what they deserved and set up gallows in large squares and purged the corrupt, we would not be facing these issues now,” he said.

“If we were revolutionary, we would not have allowed them to even state their existence; we would have banned all parties, all groups and would have only created one party, the Hezbollah,” Khomeini added.

Then came the chilling remarks that foretold of the darkest era in Iran’s recent history.

“We will go forward in our path and are not afraid of anything. We do not fear that they call us a dictator or that we oppose freedom.”

And that is exactly what he did.

Fatwa and the execution of political prisoners

Feeling threatened by the dissent against his absolute rule, less than 10 years into the Islamic revolution, Khomeini issued a religious decree, known as the “death decree” to execute all his jailed political opponents, namely supporters of the People’s Mojahedin Organization of Iran.

“It is naive to show mercy to those who wage war on God”, he wrote in the decree.

Addressing the decision makers and so-called judges Khomeini wrote, “I hope that with your revolutionary rage and vengeance toward the enemies of Islam, you would achieve the satisfaction of the Almighty God”.

“Those who are making the decisions must not hesitate, nor show any doubt or be concerned with details. They must try to be most ferocious against infidels. To have doubts about the judicial matters of revolutionary Islam is to ignore the pure blood of martyrs”, the 87 year old cleric wrote in the fatwa.

And with this, in less than one year, around 30,000 political prisoners were executed in Iran during the summer of 1988.

Today, political prisoners and opponents of the regime are still hanged in Iranian prisons.

Ruhollah Khomeini believed himself to be the leader of all Muslims.

Shortly after assuming power, he began calling for Islamic revolutions across the Muslim world, including in Iran’s Arab neighbor Iraq, the one large state besides Iran with a Shia majority population.

“All Islamic countries should come under one government and one banner”, he said adding that the “large Islamic government should take over the world.”

The war wasn’t just about Khomeini’s disagreements with the Iraq. Khomeini wanted to expand his control into Iraq due to its largely Shia population. It was the best country for Khomeini to “export” his “revolution”, or terrorism to.

To this day, Iran spends billions in its policy of meddling in not only neighboring countries, but all countries around the world.

Khomeini was bent on continuing the bloody war which had brought nothing but death, destruction, and poverty. He gave the Iran-Iraq war “absolute priority” to everything else and put it “at the top of all the state’s affairs”.

Ruhollah Khomeini is known for calling the war “a divine blessing” and that “peace” would “bury Islam”.

The war lead to the death and injury of around 2 million Iranians including tens of thousands of child soldiers used to clear minefields.

Ruhollah Khomeini was the first world leader to issue a fatwa calling for the assassination of a foreign citizen.

On February 14, 1989, he called for the death of British Indian novelist, Salman Rushdie for his novel, “The Satanic Verses”.

The fatwa required not only Rushdie’s execution, but also the execution of “all those involved in the publication” of the book.

Although Rushdie was unharmed, a Japanese translator of the book was assassinated while two other translators escaped assassination attempts.

The fatwa has still not been revoked.

By openly and officially calling for the death of a foreigner, Khomeini basked in his new found power and showed his utter disregard for all humanitarian international laws.

Khomeini died at the age of 87 in 1989. Many ordinary Iranians rejoiced upon his death and still celebrate June 3 as the day of the death of Iran’s bloody dictator.

40 year legacy of the Islamic Republic of Iran – Unemployment