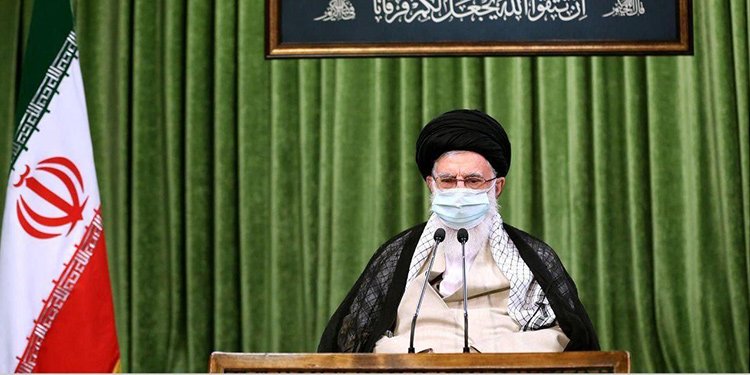 In a video conference call today with Iran’s parliament, the regime’s Supreme Leader expressed optimism that the country’s dead economy would bounce back. Ali Khamenei compared the current economic state of Iran to a “disease” adding that due to Iran’s “defensive strength, the country would undoubtedly overcome the disease”.

He cited “inflation, the devaluation of the national currency, high prices, the problems of manufacturing firms and the problems posed by sanctions” as some of the “the hardships of life, especially for the lower and middle classes.”

But can the regime fix the diseased economy marred by corruption and mismanagement? No, it cannot. And Khamenei’s feigned optimism is just another sorry attempt at preventing a very angry population from taking to the streets.

The corruption in Iran stems from the very top of the regime. In other words, the Supreme Leader whose assets total $200 billion according to the US embassy in Baghdad, is the most corrupt of all. The current state of the economy is the result of 41 years of cronyism and nepotism. As long as this regime is in power, things will only get worse.

According to a regime affiliated economist, who is a frequent guest on Iran’s state-run media, the country’s corruption is “institutionalized”.

“Unfortunately, corruption in our country is institutionalized in the sense that existing decision-making structures themselves are corrupt and even those who are involved in this system but do not participate in corruption are automatically eliminated from the wheel of power,” Hossein Zaghfar said.

And the only reason Khamenei and other regime officials express concern about the state of the economy is their fear of Iran protests.

Khamenei expressed this fear during his last public meeting with so-called students in mid-May. He told the Tehran “students” mostly affiliated with the paramilitary Basij forces that the people had a right to seek justice but “should be seriously careful” that it “not be considered anti-government protests”.

Khamenei also implied that if the regime’s supporters did not follow his instructions to “solve the country’s problems”, others would take the lead “whose goals are to attack the state and not solve people’s problems”.

Because Khamenei cannot fix the economy to prevent protests, he has turned to the only other option at his disposal. Suppression. In fact, he is very good at cracking down on dissent since this trait comes naturally to all tyrants as their only means for survival.

During the last round of nationwide protests, the regime brutally gunned down and killed at least 1,500 men, women, and children.

More recently, Iran’s Supreme Court confirmed the death sentences of three young men arrested during the November 2019 protests. Many other protesters and activists have been sentenced to lashes and heavy prison terms. Iran Human Rights Monitor also reported today that another young man arrested during November protests was charged with “moharebeh” or enmity with God. A charge that could carry the death sentence.

But this will not stop angry Iranians from taking to the streets. It never has. Many officials have warned the regime of imminent Iran protests that will be “even more violent” than its predecessors.

Mostaghel state-run Daily reiterated this in its editorial piece today.

Citing November 2019 protests, the daily wrote that the only reason Iranians ended their protests was because of “fear from bullets and pressure”.

“The main players know that what happed in November is the prologue to a flood that will soon start from the slums and wash away everything in its path,” the daily wrote.

The daily also implied that the only reason Iranians were not taking to the streets yet was due to the COVID-19 epidemic which has taken thousands of lives. Citing the regime’s intentional mismanagement of the epidemic, Mostaghel daily said that the regime was using the crisis to postpone Iran protests.

But we all know that the coronavirus epidemic will end one day and when it does, Iranians will rise like never before taking back what is theirs at all cost. And the world will be rooting for them.