by IranNewsWire
in Iran Protests, Reports
0 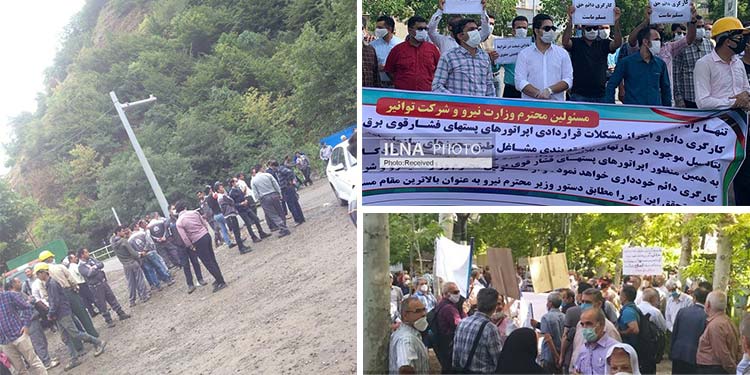 According to collected reports by sources affiliated with the Iranian Resistance in the month of June, Iranians held 219 recorded protests in 74 cities and 24 provinces, with an average of seven to eight protests a day. Most of June’s Iran protests were carried out by workers and employees demanding their unpaid wages and other violated rights.

Workers staged 105 protests in 37 cities and industrial and business regions which amounts to an average of four protests per day. The gatherings were in protest to delayed paychecks, lack of insurance, lack of sanitary conditions due to COVID-19, privatization, lack of job security, the dismissal of workers, and the closure of companies.

The most important protests included:

There were nine protests in Tehran and Ahwaz (SW Iran) by teachers, literacy movement instructors, contract teachers, and preschool teachers. They gathered to protest their lack of job security, poor living conditions, their employment status, recruitment tests at teacher universities, and their unpaid wages.

Pensioners held eight protests in four cities in the month of June. Most pensioners live under the line of poverty and can barely make ends meet and the COVID-19 outbreak has only made their lives more difficult. Retired workers and employees gathered to demand their unpaid pensions and benefits, and an increase in their pensions. They also protested the poor condition of Iran’s Pension Fund.

Farmers held five protests in four cities in the month of June. They protested against the Waghf Charity Organization for depriving them of the ownership to their lands, and against the Ministry of Agriculture for its lack of accountably regarding their farming problems. Iranian farmers also protested water scarcity which has left their fields dry, as well as the government’s failure to buy their products.

Students held one protest in one city in the month of June.

There were eight hunger strikes in four prisons in the month of June.

Other sectors of the society staged 80 Iran protests in 42 cities across the nation in the month of June.

The most important protests are as below:

Following reports that 42 workers from Azarab Industries were sentenced to one year in prison, 74 lashes, and one month of forced labor, IndustriALL Global Union condemned the suppression of workers by the Iranian regime.

“Once again, workers in Iran are being brutally attacked for standing up for their basic rights. The Azarab workers must be immediately released. All charges must be dropped, and the delayed wages must be paid,” IndustriALL assistant general secretary Kemal Özkan said in a statement.

The regime has since announced that 15 of the workers have been acquitted of the charges, though such statements by the regime cannot be trusted.