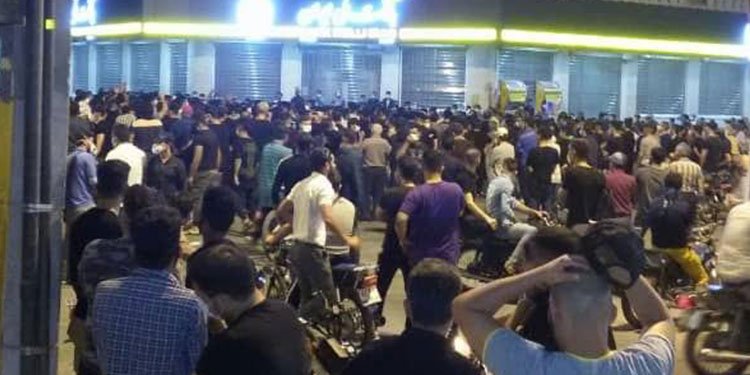 According to collected reports by sources affiliated with the Iranian Resistance in the month of July, Iranians held 237 recorded protests in 85 cities and 26 provinces, with an average of eight protests a day.

Some protests were organized, while some were held for consecutive days, such as the Haft Tappeh workers protests, which continued for more than a month.

Workers staged 122 protests in 54 cities in July. The gatherings were in protest to delayed paychecks, lack of insurance and benefits, paycheck deduction, dismissal of workers, lack of job security, closure of companies, privatization, and the non-implementation of the job classification plan.

Most of the workers protests this month were held for consecutive days. The Haft Tappeh Sugarcane Company workers protest started in June and continued throughout the whole month of July.

Pensioners staged 15 protests in 12 cities in July, despite the threats of COVID-19 and the hot weather. Due to a nationwide call, pensioners from Khorramabad, Kermanshah, Bojnourd and Ilam in western Iran, the central cities of Arak and Isfahan, Ahvaz in southwestern Iran, the northeastern city of Mashhad, and the capital Tehran and its sister city of Karaj, and Tabriz in northwestern Iran protested low pensions and expressed their economic grievances.

Farmers held six protests in five cities in the month of July. They protested their lack of water and not receiving financial compensation for the damages to their products from floods.

Teachers held five protests in two cities in July. They protested their poor living conditions, not receiving their delayed wages, and their employment status.

Retailers staged three gatherings in two cities in July, to protest market fluctuations and because their purchased goods were not released by customs.

Other sectors staged 68 protests in 36 cities. Some of these protests include:

Protests in Behbahan, southwestern Iran, against the poor state of the economy. The protesters chanted against the clerical regime. There were also reports of sporadic clashes with security forces who used tear gas to disperse protesters.

Gathering by the families of protesters sentenced to death for several days outside the Isfahan Judiciary. The five young men were arrested during December 2017-January 2018 protests.

Gathering of locals in Suza and Mossen Village, in Hormuz Island (southern Iran). They protested the transfer of their ports to a private company.

Locals in Bushehr, southwestern Iran, clashed with security forces who had come to demolish their homes.

Chicken sellers in Sanandaj and Marivan, western Iran, protested the increase in the price of chickens, which has lowered their income.

Truck-drivers in Tehran protested for several days to demand protective equipment for COVID-19.