by Adena Nima
in Reports, Video
0 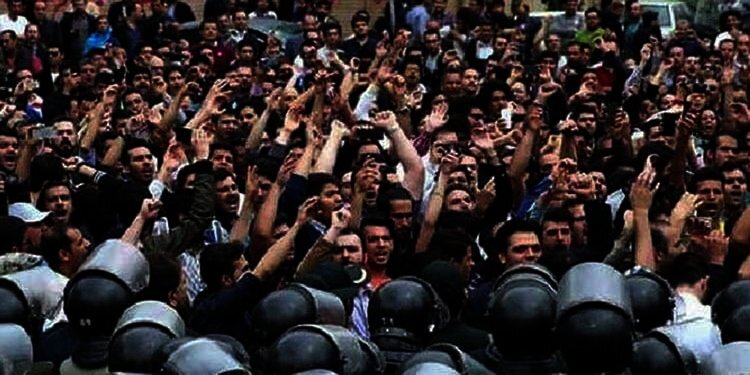 Widespread anti-government protests and nationwide strikes swept across Iran in 2018.
Many said that the population was on the verge of explosion.

The Iranian regime responded with a violent suppression campaign to silence dissent.

Amnesty International said that more than 7,000 protesters were arrested in 2018 and called it Iran’s ‘Year of Shame’.

Most protesters are born after 2000 and reject the regime that has been in power for 40 years.

These rebellious youth use every opportunity to express their protests and hatred towards the regime.

Officials know that millions of Iranians reject the regime in its entirety but due to widespread suppression, the formation of million-strong protests is virtually impossible under current circumstances.

Despite the regime’s widespread suppression, defiant Iranians are resisting the theocracy with “Resistance Units”.

The Units which have been formed throughout Iran, are organized supporters of the PMOI (MEK).

The Resistance Units destroy images of key figures of the Islamic Republic, the regime’s Supreme Leader Khamenei and its founder, Khomeini, in public areas.

They also set fire to the bases of Basij forces, part of the IRGC tasked with suppressing dissent in Iran.

Their role is to lead and organize and be the driving force behind the protests for regime change.

They counter the atmosphere of fear created by the regime and are a source of inspiration for resistance in Iran.

In October 2018, The General Prosecutor of Kohgiluyeh and Boyer-Ahmad Province said that a court had sentenced six people to prison for writing slogans on walls and ripping up images of Iranian officials.

In comments carried by the ISNA state-run News Agency, the General Prosecutor of the southwestern province said that the accused were members of the “Nefagh Group” which is a derogatory term the regime uses for the MEK.

According to a human rights group, the Tehran Revolutionary Court sentenced an MEK activist and supporter to death in March this year.

According to the sentence, Abdollah Qasempour was sentenced to death and eight years of prison on charges of “enmity with God by membership in, endorsement of and cooperation with the People’s Mojahedin Organization of Iran”.

The Court accused 34-year-old Abdullah Qasempour of filming the incident and sending the video to media affiliated with the MEK.

In October, the head of the Intelligence Department in a northern province in Iran said that at least 110 Iranians were “dealt with” for their communications with an opposition group.

According to Alireza Rezaie who heads the Eastern Azarbaijan Intelligence Department, sixty of these people were detained while 50 were given notices by security services.

“Foreign intelligence services use the capacities of exiled dissident groups such as the Monafeghin (derogatory term for the MEK), monarchists, leftist groups and separatists and manage and lead them in local, national and international levels to reach their goals”, the head of the Intelligence Department added.

According to Rezaie, the MEK became more active in the East Azarbaijan Province in 2018 adding that the opposition group was tasked with gathering intelligence in 2019.

“Last year, the (MEK) took advantage of the economic and social conditions to extend its activities”, he said adding that 60 people affiliated with the MEK were “dealt with”.

Before this, Iran’s Minister of Intelligence, Mahmoud Alavi, said that numerous teams affiliated with Iranian dissident groups were arrested in 2018. “Over the past year, intelligence forces managed to identify and destroy 144 Takfiris (dissidents), terrorist teams, 116 cells linked to the Monafeghin (MEK), 44 anti-revolutionary groups, and 380 drug dealers,” Alavi said, addressing a congregation of worshipers in Tehran on April 19th.

According to the National Council of Resistance, more than 116 people were arrested by the regime in 2018.

In a recent statement, the NCRI disclosed the names of 28 political prisoners who are currently in prison and called for urgent international measures for their immediate release.