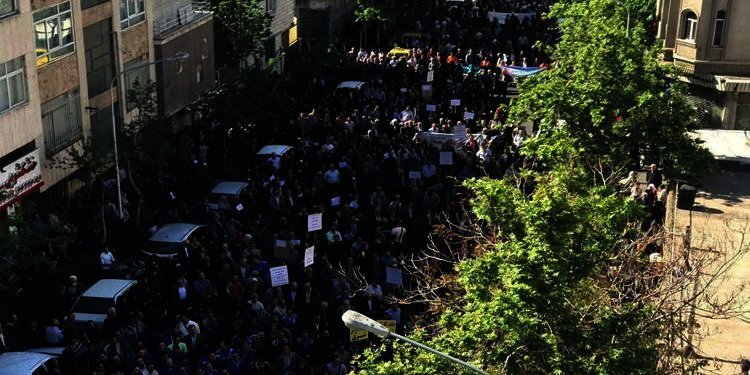 The head of the Tehran City Council said that Iran’s popular protests were far more dangerous than foreign threats for the regime.

“The people’s dissatisfaction in the current situation is the greatest threat to the system and is more dangerous than foreign threats,” Mohsen Hashemi said during the Council’s meeting.

“Being of service (to the people) and solving the problems of the society is considered to be the greatest deterrent and defensive power for the system,” he added.

The Iranian regime is banking on the theory that the US will not strike out militarily against Iran. Iran’s Supreme Leader Khamenei has stressed that “there will be no war” in his speeches on numerous occasions.

It is clear from statements by officials that the regime fears this kind of “explosion” most of all and is concerned about Iran’s popular protests.

Reports indicate that 80% of Iranians live under the line of poverty and cannot afford their basic needs. Widespread poverty coupled with the recent floods that swept across Iran, ravaging homes and farmlands alike have angered ordinary Iranians who say that their economic woes are the result of the regime’s corruption.

A female representative of the Iranian Majlis or parliament, cited the state’s widespread corruption and said that the regime was not actually espousing a real brand of Islam.

“We cannot say that our republic is an Islamic republic. One cannot defend a society in which some people eat and do not work and become wealthier by the day while some people do not eat and work but unfortunately become poorer by the day,” Hajar Chenarani said during a parliament session on Saturday adding that it was “difficult to save such a society.”

In fear of Iran’s popular protests, the MP blamed the Islamic Republic and widespread embezzlement for the current state of the economy.

“Why are we all whining and weeping? Our banking system needs to be reformed. The banking system is full of problems. Why do they resort to auctions to claim false money and say that this is the law?… We all know that the banks are facing deficits due to embezzlement and billions in loans to regime elites,” Chenarani added.

Another representative cited the destruction of domestic production as a result of Iran’s corrupt banking system.

“Our production is entangled with our banking issues, and many of our manufacturers are either in prison, are fugitives or their factories have been shut down due to bank notices,” Mohammad Kazemi said.

He cited the economic hardships that ordinary Iranians faced and said that Iran’s “distribution system was dreadful” and that it had led severe problems for Iranians.

“Families wait in line for a kilogram of sugar cubes or sugar from morning till the afternoon and in the end do not receive anything,” he added.