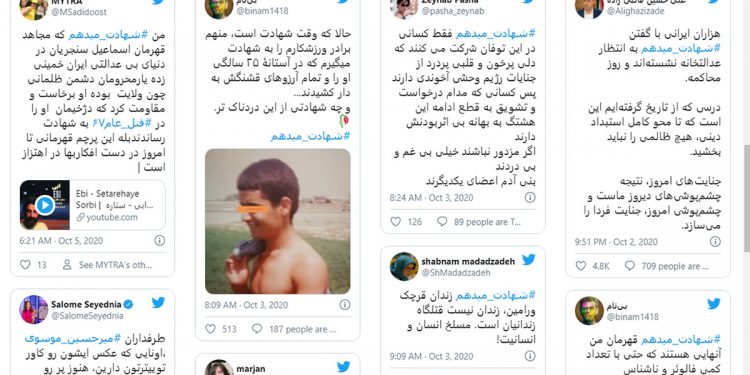 Iranians used the hashtag شهادت_ميدهم or “I testify” in English to shed light on the Iranian regime’s 41 years of human rights violations. They testified to the regime’s executions, mass killings, and basic civil and human rights violations. In a Twitter campaign that started on October 2, hundreds of Iranians tweeted about the death of their family members or their personal plight.

The Twitter campaign started in support of Shahin Naseri, Navid Afkari’s cellmate who testified in court that the 27-year-old protester was tortured to make false confessions. Naseri was threatened in court and was subsequently transferred to an unknown location. His lawyer later said that he was returned to Adel Abad Prison in Shiraz, southwestern Iran.

Shahnaz Akmali, whose son, Mostafa Karim Beigi, was killed by security forces during protests in 2009, testifies about the “secret burial” of her son and that of Navid Afkari.

Mostafa’s sister, Maryam, tweeted about the execution of Navid Afkari, the torture of his two detained brothers, and the testimony of Shahin Naseri.

The sister of political prisoner Atena Daemi, Haniye, testifies to the “brutal arrest” of her sister.

Another user, “Javad” tweeted about the death of 14-year-old Farhad Khosravi, a border porter or “kolbar” who died last December from hypothermia. The Kurd boy was trying to escape from an IRGC ambush when he was caught in a snowstorm in western Iran and passed away.