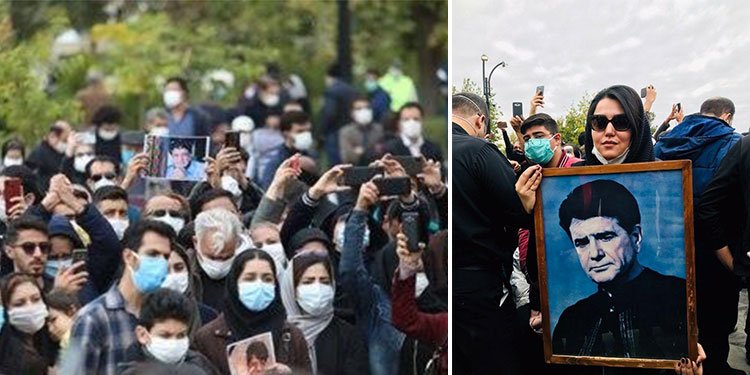 Thousands of Iranians gathered outside Tehran’s Jam Hospital last night after it was announced that legendary Iranian singer and composer, Mohammad-Reza Shajarian passed away from kidney cancer at the age of 80.

The iconic vocalist master of Persian traditional music was known for publicly speaking out against the regime’s brutal suppression of the 2009 nationwide protests and for his anti-regime rhetoric.

His fans also chanted against state-run TV and radio which had banned his image and voice until his death yesterday.

Thousands of Iranians also gathered today in Ferdowsi’s Tomb, where the iconic singer and composer will be buried. They sang some of his famous songs, shrouded in political allegory, in unison. A video circulating on social media showed an official at the Islamic Culture and Guidance Organization telling his fans that his funeral would be held on Saturday. Still, many Iranians were reluctant to leave due to their lack of trust in the government and security forces who had tried in vain to disperse crowds and prevent a gathering from taking place.

Several images on social media also showed a large number of security forces and riot police standing on the ready in Mashhad to prevent the gatherings from turning into protests.

Shajarian’s legacy in “standing with the people“

Although Mohammad-Reza Shajarian was a legendary Iranian artist who changed the face of classical Iranian music, he was also beloved by the masses because of his willingness to speak out against the regime.

In a 2015 interview with Euronews, Shajarian said he was popular not only because of his music, but because he stood with the people, not the ruling elite.

“Artists have to be very careful about how they behave. The community is very intelligent and conscious. I have tried to take the side of the people. My music is for the people, not for ministers and statesmen.”

He was also a firm believer in freedom and said in several interviews that Iranians would eventually prevail against the regime.

“The mentality of the majority is a priority over the mindset of one person and in the end, the majority will prevail”, he said in an interview with Australia’s SBS TV in 2010.

In another interview he said that “the people will fight for what they want and will eventually succeed.”

Shajarian sided with protesters during 2009 protests across Iran when millions took to the streets against election fraud which saw the re-appointment of Mahmoud Ahmadinejad as president.

“After the president insulted the people and said that protesters were just ‘dust and trash’ I immediately told the BBC that I was also part of that ‘dust and trash’. My voice has always been for the ‘dust and trash’ and I won’t allow state-run TV and radio to use my voice anymore,” he said in another interview.

In 2002, Mohammad-Reza Shajarian said Iran had yet to see democracy and that his music reflected the pain and suffering of the people.

“Just look at our history. It’s full of war, killings, misery, pressure, and tyranny. And we still have not seen democracy. My music reflects this situation. You can’t ask music to turn a blind eye and just have fun and dance. We still have not reached the time to use that kind of music. For now, our music reflects our pain. This is all derived from tyranny and oppression. All our art has changed to reflect that.”

Because of his massive popularity, the regime was only able to retaliate by banning his concerts and albums which only made him more popular. After an 11 year ban, the state-run IRIB TV, showed his image only to announce the news of his death on Thursday.