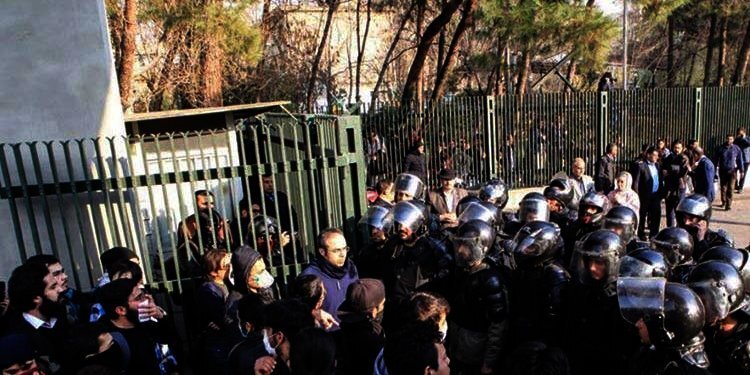 Tehran Azad University students gathered for the 3rd consecutive day in protest to the lack of accountability by officials regarding a university bus accident which killed 10 people.

The bus was carrying 30 students along a mountainous road within the science research campus of the Islamic Azad University in northwestern Tehran when it came off the road and hit a concrete column on Christmas day.

Videos on social media and reports from Tehran indicate that large crowds have gathered in Tehran’s Enghelab Square with ordinary Iranians joining the student ranks.

The Tehran protesters chanted “Don’t be afraid, we are all together”, and “threats and prison are no longer effective”.

Security forces and riot police also attempted to arrest a number of people with protesters shouting, “leave them alone”.

In a large protest held yesterday by the Azad Science and Research University students in Tehran, a car that students said belonged to the President of the Islamic Azad University, Mohammad Mehdi Tehranchi, rammed into protesters to make its way into the university.

This led to national outrage and forced Tehranchi to deny the whole thing on state-run media.

The protesters have demanded the resignation of the Azad Islamic University Chairman of the Board of Trustees, Ali Akbar Velayati, and Tehranchi.

Officials have attempted to silence the students’ grievances.

Yesterday, Iran’s Attorney General, went to the students’ rally in an attempt to calm the angry students.

In another attempt, according to a video published on social media, students said that the university was washing its old, depleted bus fleet to present them as new buses to the public.

The widespread corruption of Iranian officials has made Iran one of the most vulnerable to car crashes, fires and natural disasters.

Iranian officials have recently warned that the disenchanted people of Iran would bring down the regime.

Speaking in Jamaran on December 29, the grandson of the founder of the Islamic Republic of Iran said that there was no guarantee that the regime would always stay in power.

“We must find the rules for human behavior and the causes of stability and collapse in order to live according to them. Otherwise there is no guarantee that we (regime) will stay and others will go,” Hassan Khomeini said.

The grandson of Ruhollah Khomeini quoted religious Shiite figures as saying that “tyranny” was the most important problem in a society.

He stressed on the need to appease the public, indirectly warning that Iranians were disenchanted with the regime and said that “the people had to feel contentment and force should not play a part in the society.”

He ended his speech by warning those in power, saying, “We have to fear the day that positions collapse and roles change,” referring to the imminent collapse of the regime.

In an editorial for the state-run Entekhab Daily, a member of parliament, said that the regime would be put aside.

A few days before that, Faezeh Hashemi, the daughter of the late powerful cleric, Rafsanjani, said that the regime had all but collapsed and was only in power due to “intimidation”.

“In my opinion, in substance, the collapse has already happened. It’s only the physical collapse that has not happened and I deem it very probable that it will happen,” the former member of Iran’s parliament said. 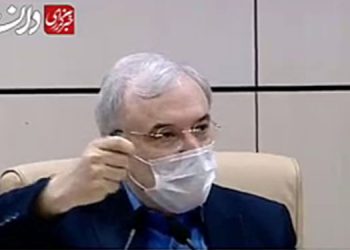