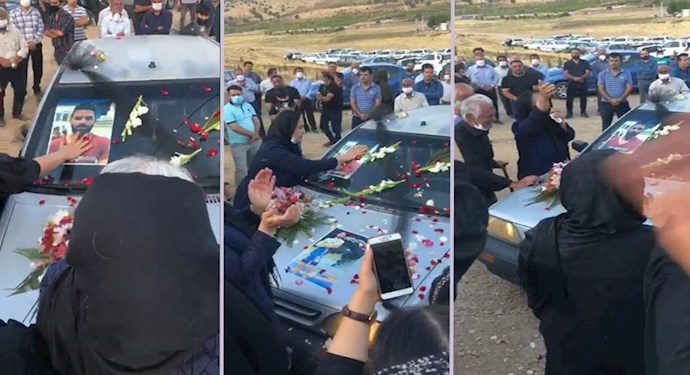 Iranians in central and southwestern Iran commemorated two executed protesters on Thursday while the families of the victims of the Ukrainian airliner shootdown gathered at the crash site and chanted against Iran’s dictators.

Despite security measures by the regime to prevent the gathering of Iranians for executed protesters Navid Afkari and Mostafa Salehi’s commemoration ceremonies, their friends and families gathered at their graves.

In a ceremony for Navid Afkari, his family, friends, and locals in Sangar Village near Shiraz, where he was buried, chanted, “Navid is a hero”. They also clapped with Iran’s national anthem which is not officially used by the regime.

Navid Afkari was executed at dawn on September 12 despite a mockery of a trial and national and international outrage over his death sentence. He was hastily buried under strict security measures on the same night due to reports that he was tortured. His family were only allowed to see his face.

Navid’s car was also bedecked with flowers during the ceremony while his mother, father and siblings kissed the picture of the wrestling champion on the windshield to chants of “Navid is a hero”.

Reports today also indicated that the regime increased its security measures to prevent an organized gathering by Iranians at Navid’s grave on the seventh day of his death. A video on social media even showed IRGC helicopters over Sangar Village to prevent gatherings.

The friends and family of another executed protester, Mostafa Salehi, also gathered at his grave in Isfahan central Iran to commemorate the young worker 40 days after his death.

The father of two was detained during protests in 2018 and was hanged in Isfahan at dawn on August 5. His trial was also faulty, and he said that he was tortured to confess.

Also on Thursday, the friends and families of the victims of the Ukrainian airliner shot down by the IRGC at dawn on January 8 gathered to commemorate their loved ones. They chanted “down with the dictator” while scattering flowers on the crash site in southwest Tehran. All 176 passengers and crew on Ukrainian airliner flight PS752 were killed.

The regime denied the shootdown for three days and still maintains that it did not know from day one that the plane was shot down.  Iran was forced to admit to the shootdown after 3 days when US officials said they had evidence that the regime shot down the plane.

When the regime acknowledged the shootdown following announcements by US officials that they had evidence the plane was shot down, protesters took to the streets in 17 provinces directing their outrage at the regime’s Supreme Leader Ali Khamenei.