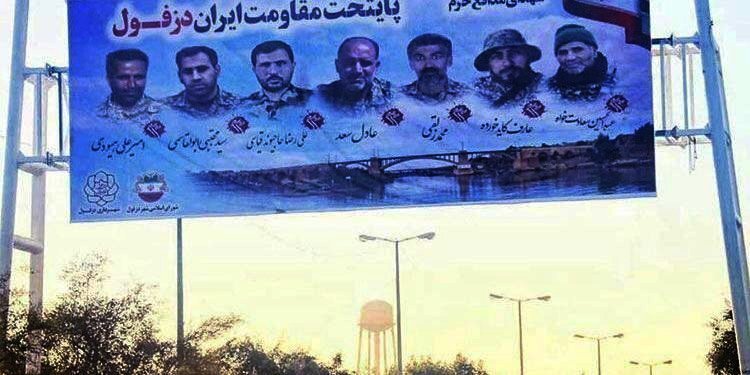 According to social media reports and reports by the state-run IRNA news agency, angry Iranians brought down a large billboard today with images of the so called “shrine defenders”, regime forces sent to fight for the Assad regime in Syria.

Numerous videos on social media showed a large group of people in Andimeshk in the southern province of Khuzestan bringing down the large billboard and cheering as it fell.

IRNA said that security forces fired in the air and used tear gas to disperse the angry crowds.

The billboard, which had images of seven regime forces killed in the Syrian war was installed in the Andimeshk- Dezful road.

According to a protester, Dezful municipal workers installed the billboard at dawn today.

Ordinary Iranians despise the regime’s warmongering in the region and have chanted, “Leave Syria and think of us”, in their streets protests on many occasions as Iran spends billions in its proxy war in Syria.

IRNA said that the reason behind the protests in Andimeshk were disagreements on where the billboard should be installed.