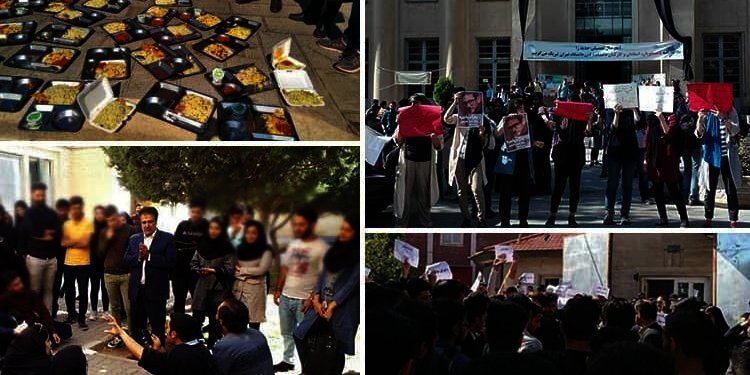 Tehran University students marched on the university campus today, holding pictures of detained student activists and chanting for their release.

The protest was held against the presence of Iranian president Hassan Rouhani.

Mocking Rouhani, the Iranian university students held a placard which read, “The ‘taste of sweet justice’ is 100 years of prison for students”.

They also held placards against high tuition and demanded an end to the prosecution of student activists.

In videos circulating on social media, Tehran university students, who were mostly girls, chanted, “Students and workers stand together”. They also chanted for the release of detained workers and teachers.

Tehran’s University of Science and Technology

Students of Tehran’s University of Science and Technology also gathered today, protesting the food poisoning of students who had eaten food from the university cafeteria.

The state-run ISNA News Agency said than more than 200 students were poisoned.

The protests started yesterday at midnight near the men’s dormitory and continued into the afternoon.

The students refused to eat lunch and arranged their plates on the ground as a sign of protest. They demanded an apology from the head of the university.

Last night, some of the poisoned students were taken to the hospital.

According to Iran’s Student Council, a group of students at the Khomeini International University in the northwestern province of Qazvin, gathered yesterday, protesting gender segregation in the university cafeteria. The report said that the Iranian university students stressed that universities were not military bases and vowed not to stay silent.

On October 14, students of the Quchan University of Technology in the northeastern city of Mashhad, gathered, protesting high tuition and other university policies.

According to ISNA, the students gathered outside the university’s Central Organization.

The report said that the head of the university talked to the Iranian university students, promising to see to their demands.

On October 13, a large number of students at Tehran’s Amirkabir University of Technology gathered in protest to high tuition.

The students addressed university officials and chanted slogans against high tuition and excuses by the university to charge students.

The student movement has always played an important role in Iran’s political arena.

In 1941, with the abdication of Reza Shah and the occupation of Iran by allied forces, Tehran University became key in campaigns against authoritarianism and foreign meddling.

The student movement continued its activism until three students were shot and killed by Shah’s troops on December 7, 1953, during an anti-Shah demonstration at Tehran University in protest to a visit by then US Vice President Richard Nixon with the Shah.

In memory of the three students murdered on that day, 16 Azar (December 7) has since been known as Student Day.

The annual observance of Student Day was met with suppression during the Shah’s reign.

After the 1979 revolution which brought the Islamic Republic to power, the government used Student Day as an expression of the nation’s disapproval of US policy.

But it quickly turned into a threat against the government’s position instead.

It was during the presidency of Mohammad Khatami that the Iranian student protests of July 1999 occurred, which were at the time the most widespread and violent public protests to occur in Iran since the early years of the Iranian Revolution.

The 1999 student protests is considered the first massive uprising by the generation born under the Islamic Republic of Iran. The protest grew out of response to the government’s violent attack on Tehran University’s student dormitory, called “Koye Daneshgah” on July 9, in which a large number of students were seriously injured while several were killed.

Over the next five days following the attack, around 50,000 students protested in Tehran, in addition to thousands more in various universities across Iran, against both conservatives and reformists, and the Supreme Leader Khamenei.

Scenes of clashing between students and security forces during the 1999 student uprising.

President Mohammad Khatami, who was elected just two years before under a so called reformist banner is known for quashing the uprising which called for the replacement of the Islamic Republic in its entirety with a system that upheld the ideals of secular democracy.Iconic image of a young man carrying a girl student who was injured after security forces attacked students at Tehran University during the 1999 student uprising.

In the aftermath of the protests, more than 70 students disappeared. In addition to the more than 1,200 detainees, the whereabouts and condition of five students remain unknown.

Mahmoud Ahmadinejad came to power in 2005. Taking a religious hard line, the little known Tehran Mayor cracked down against the student movement which was at the forefront of the struggle for freedom and democracy.

Many students were also “starred” for their political activities and banned from continuing their studies which sparked the flames for the coming uprising in 2009 when millions took to the streets in protest to what they saw as fraudulent presidential election which brought Ahmadinejad to power for four more years.Millions gather in Tehran’s Azadi Square during the 2009 Iran uprising.

Once again students played a leading role in the 2009 uprising especially in the capital. Many students were killed during protests on the streets while many more were arrested and killed under torture in prison, namely the notorious Kahrizak Detention Center.

Rouhani’s term and the “end game“

After the 2009 uprising, students entered a new phase of animosity with the whole system. Students now protest in solidarity with workers’ strikes, and protests by teachers, nurses, truck drivers, bazaar merchants and poverty stricken farmers.

During the January protests that shook Iran, students were the first to draw the line between the people and the regime in its entirety chanting, “Reformists, conservatives, the game is over.”

The chant became the slogan for what many believe is the end game for the regime as it indicates that the people have given up on the whole system of the Islamic Republic of Iran after close to 40 years of poverty and suppression. 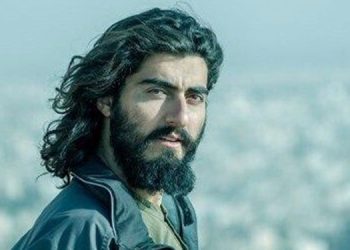 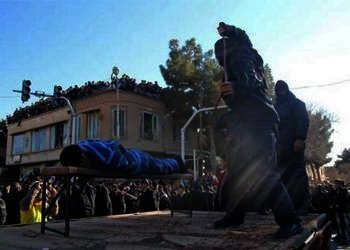 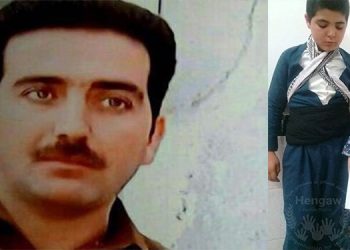