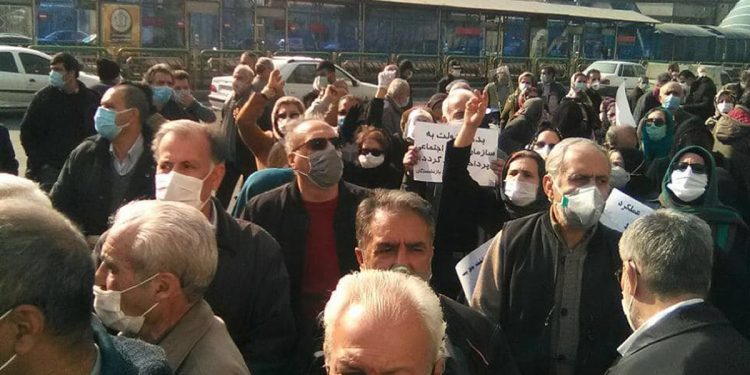 Iranian pensioners gathered today in 16 cities in an organized effort to express their economic woes and demand higher pensions.

The Iranian pensioners demanded balanced wages, payment of government debt to the Social Security Organization and an increase in pensions to cover their living costs. The protesters held signs criticizing the government for receiving pensions that were below the poverty line.

The pensioners issued a statement, saying they had no other choice but to gather, despite the COVID-19 pandemic risks. They insisted that they would use their rights to assemble if their demands were not met.

The pensioners held placards with slogans such as “we can only earn our rights on the streets”. In Mashhad, northeastern Iran, they laid out tablecloths on the ground in a symbolic measure to imply that they could not afford food and their basic needs.

Their other demands included free and adequate health care services, and the right to organize and have free independent unions.

Due to a record low of the country’s currency and economic problems, as well as corruption and mismanagement in Iran, the poverty line for a family of four has increased to 10 million tomans (around $388). The absolute poverty line is 6.8 million tomans (around $264), which puts 50% of the Iranian population, including pensioners, under the line of “absolute poverty”.