by IranNewsWire
in Iran Protests, News
0 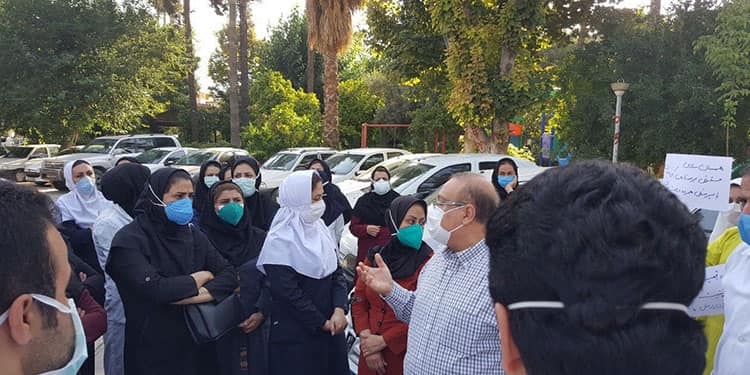 Iranian healthcare workers in various cities in Iran demanded their unpaid wages during protests in several cities over the weekend.

Healthcare workers in social security hospitals in the central city of Isfahan and Shiraz, southwestern Iran gathered yesterday to demand higher wages. They said the hospitals were not paying them according to new government-approved wages. The healthcare workers currently get close to 2 million tomans, around $80, but should get around $125 according to government-approved wages for the current Persian year, which started in March.

Considering the current inflation and economic problems in Iran, even $125 is not enough for a family’s basic needs.

Healthcare workers at Tehran’s Sapir Hospital also gathered outside the hospital to demand their unpaid wages on Saturday.

Iranian healthcare workers at Jalil Hospital in Yasuj, southwestern Iran gathered outside the Kohgiluyeh and Boyer-Ahmad Governor’s Office on Saturday to demand their unpaid wages and benefits.

Today, a group of Iranians who work in the health sector gathered outside the parliament in Tehran to express their economic grievances.

Iranian healthcare workers’ get low wages despite the severe increase in coronavirus cases and deaths in Iran. Reports indicate that many healthcare workers have tested positive for the deadly virus and have lost their lives while providing medical care for COVID-19 patients.

The head of Arak Medical Sciences University said today that 146 doctors and nurses in the southwestern province of Markazi had been infected with COVID-19.

The head of Tehran’s Shohadaye Tajrish Hospital said today that close to 200 healthcare workers at the hospital had been infected since the COVID-19 pandemic started in the country.

Iran’s medical staff face a shortage of medical supplies and medication, which has endangered their lives.

According to an Iranian opposition group, the regime is hiding the number of COVID-19 fatalities.

The National Council of Resistance of Iran (NCRI) said today that at least 77,000 Iranians had died from the virus. Government corruption and coronavirus mismanagement are the leading cause of COVID-19 fatalities in Iran.

Government corruption and coronavirus mismanagement are the leading cause of COVID-19 fatalities in Iran.