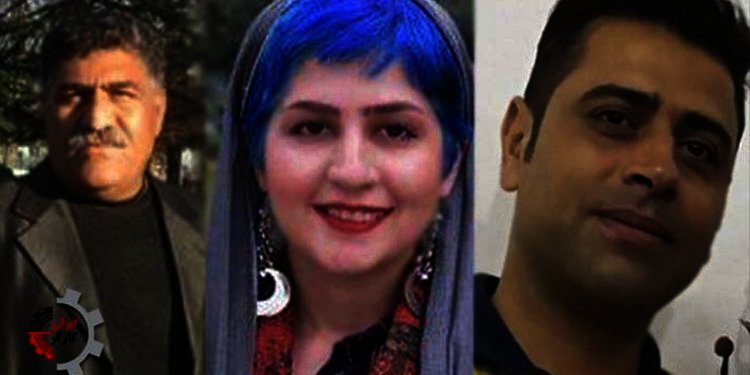 Iran’s state run TV has broadcasted the forced confessions of a number of labor activists in the southern province of Khuzestan depicting them as being linked to “communist separatist movements”.

The show called “20:30” which makes political propaganda for the security apparatus of the regime is known for broadcasting the forced confessions of political prisoners.

The activists made the so-called confession dictated to them by the Islamic Republic’s security agencies in the usual style of the 20:30 program.

According to show, the activists were seeking to “overthrow” the state on orders of US President Donald Trump.

Esmail Bakhshi and Sepideh Qolian were released from prison after almost 30 days of detention in mid-December 2018. Ali Nejati is still in prison despite his dire health condition.

Activist Sepideh Qolian reacted to the broadcasting of the forced confessions in her tweets.

“Even if you bring 5,000 Haft Tapeh Sugarcane workers in front of the camera for forced confessions with lashes and batons, it will not make the fact that you are corrupt and cruel any less significant,” she tweeted.

“The images that were broadcasted of me proves what I said before that I was tortured during my incarceration. I will follow up my torture accusations more seriously and now that my confessions were broadcasted, I demand that my court be held publicly,” she said in another tweet.

She was detained a few hours after her tweets.

According to the Revolutionary Guards Corps affiliated Tasnim new agency, she was arrested this morning along with her brother, Mehdi. The news agency claimed that her brother had assaulted the female agents that wanted to arrest his sister.

Update: According to the Telegram channel of the Haft Tapeh Sugarcane Syndicate, Esmail Bakhshi was also arrested today after security forces raided his home.

Bakhshi and Qolian had previously accused Iran’s Ministry of Intelligence of torturing them in prison.

“The psychological torture was much worse than the physical torture. I don’t know what they did that my hands still shake. The ground used to shake under my feet but they degraded me and changed my personality while in prison. Despite my medication, I still sometimes suffer severe psychological attacks,” Esmail Bakshi wrote in his Instagram account weeks after his release.

Qolian also recounted the tortures she endured in her tweets.

“I wish that the only method of torture was the beatings. The most painful part was the sexual accusations that they bombarded me with in a place where I knew no one would hear even if I cried out,” she had tweeted.

“On the last day, the interrogator told me that if I say anything when I leave prison they would broadcast the forced confessions that me and Esmail Bakhshi made on the news and that they will turn us into dust,” she wrote adding that she was humiliated and degraded because of the color of her hair and the style of her clothing.

Almost all the regime’s officials rallied to reject the accusations of Esmail Bakhshi, who said that the intelligence agency of the south province of Khuzestan had tortured him “to the brink of death” during his 30 day incarceration.

The Iranian regime denies the use of torture despite thousands of reports from as early as the 80’s that prove the regime uses torture to extract forced confessions from prisoners or to break the spirit of political prisoners.