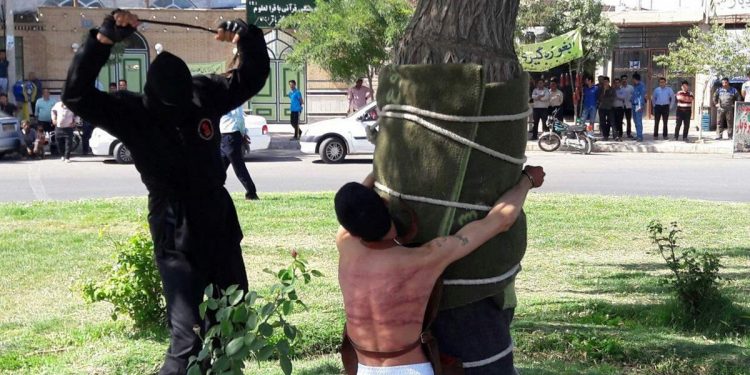 Tehran courts sentenced two men and one woman to 99 lashes in the last three days for having extramarital relationships.

Iran state-run daily reported today that two Iranians, a man and a woman, were sentenced to 99 lashes each by the by a court in Tehran for having a relationship outside of marriage.

The report said their sentence was confirmed yesterday in the 17th Branch of the Supreme Court. The man and woman were identified as Leyla and Keivan.

In another case on January 9, a man identified as Ramin was sentenced to 99 lashes for having a relationship with a girl out of wedlock in Tehran. Ramin’s sentence was also upheld by the Supreme Court and was issued for implementation.

Before that, a January 1 state-run media report said that two Iranians in the northern province of Gilan were sentenced to public flogging for animal abuse.

In late December 2020, a 29-year-old man was lashed 79 times in public in Qazvin, northwestern Iran. The unidentified man was sentenced to public flogging by the Judiciary for “several counts of troublemaking and harming security”.

Flogging is regularly handed out by the regime to its political opponents including protesters, and dissidents.

In July 2018, following the public flogging of another man in Khorasan Razavi Province, Amnesty International condemned the cruel punishment in a statement.

“The use of cruel and inhuman punishments such as flogging, amputation and blinding are an appalling assault on human dignity and violate the absolute prohibition on torture and other degrading treatment or punishment under international law,” Amnesty’s Philip Luther said.

“As a party to the International Covenant on Civil and Political Rights, Iran is legally obliged to forbid torture and other cruel, inhuman and degrading treatment or punishment. It’s simply unacceptable that the Iranian authorities continue to allow such punishments and to justify them in the name of protecting religious morals.”

More than 100 “offenses” are punishable by flogging under Iranian law. The offenses include theft, assault, vandalism, defamation, extramarital relationships and fraud. They also cover acts that should not be criminalized, such as adultery, intimate relationships between unmarried men and women, “breach of public morals” and consensual same-sex sexual relations.