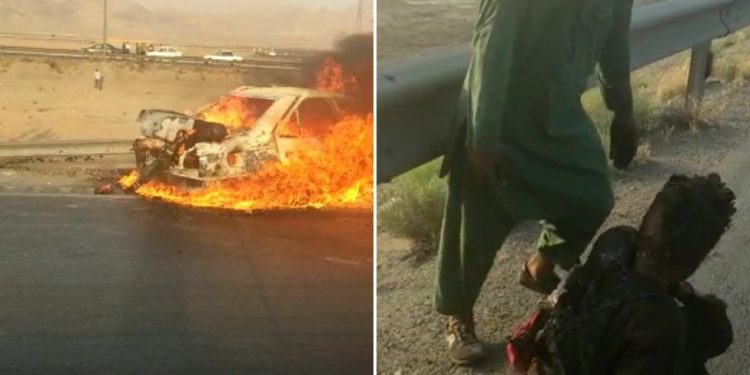 Snapshot from video of burning car and injured Afghan migrant.

A graphic video of the aftermath of a car crash in the central province of Yazd, Iran has once again highlighted the regime’s appalling treatment of Afghan migrants.

According to the head of the Afghan Migrant Affairs in Zahedan, southeastern Iran, the car was carrying 13 Afghan migrants and one Pakistani national. The video showed the burning body of a man who seemed to have been in the trunk of the car. Other injured young men were seen in the footage with charred clothes and faces, some crying out in distress.

The Political Deputy of the Yazd Governor confirmed the report but told state-run media that “the car caught fire after colliding with the highway guardrails due to its high speed”.

Laying the blame on the migrants, Ahmad Tarhomi Bahabadi said the car continued to drive away even though security forces told them to stop and “fired warning shots in the air”. He said security forces then shot at the wheels.

“The driver continued to drive on the wheel rings, and due to sparks from the rings, high speed, and flammable material, the car caught fire.”

In one of the videos of the incident, a voice is heard saying that “the police was behind them, shot them and then left the scene.”

The videos confirm the absence of the police.

Morteza Khorami, the head of the Afghan Migrant Affairs in the Afghanistan Consulate said that while Iranian authorities announced the cause of the fire as “high speed”, one of the migrants who survived the incident said that the fire started because security forces shot at the car.

In a statement today, Afghanistan’s Ministry of Foreign Affairs said that the Ministry would “seriously pursue the issue”.

The Ministry said that it had directed the Afghan Embassy in Tehran and the Afghan Consulate in Zahedan to go to the scene of the incident and contact Iranian officials to get “accurate and comprehensive information” and report back to the Ministry.

According to the statement, a delegation headed by Afghan’s Ambassador to Iran would also visit the four Afghan nationals who were injured in the incident.

Before this in early May, there were reports that at least 70 Afghan nationals who had entered Iran illegally had been arrested by border guards and were “thrown into the Harirud River after being beaten”.

According to Reuters, survivors said that at least 23 of the 57 people thrown by Iranian border guards into Harirud River drowned.