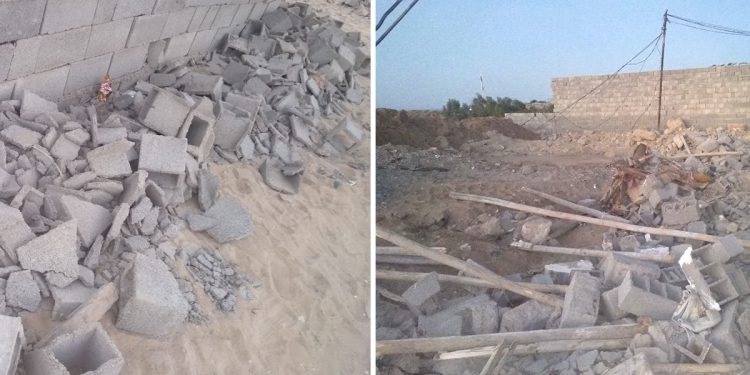 A regime affiliated housing foundation accompanied by the municipality, security forces and the police demolished 10 homes of locals in southeastern Iran on October 30.

According to the report, security forces and the police who were accompanying the Chabahar Housing Foundation and Chabahar Municipality beat and arrested the Baluch locals who protested the demolition in the Golshahr neighborhood.

An informed source said security forces attacked at 2 am, without any prior notice or demolition warrants, and demolished 10 homes.

“Locals who protested the demolition were attacked with pepper spray and batons. Even children and women were beaten,” the source said. The source also said a woman was severely injured and taken to the hospital.

“Two Baluch citizens, a man and women, identified by their last names as Gorgij were arrested,” the source added.

Before this, on October 7, IRGC and municipality forces attacked a village in Chabahar and demolished homes, which led to clashes between security forces and locals. The demolition took place without any previous warning.

Before that, security forces demolished other homes on April 21, and June 4.

In another case in May, a mother of seven who protested the demolition of her home was killed after security forces used pepper spray to attack her in Kermanshah, western Iran. Asieh Panahi was 55 years old and was trying to protect her newly built house.

In August, locals tried to prevent the demolition of their homes in Abolfazl village near Ahvaz, southwestern Iran. They were attacked with tear gas and pellet guns.