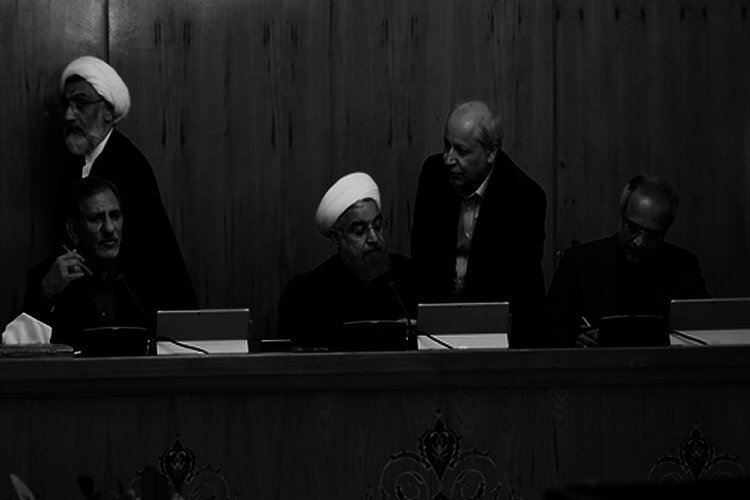 In a cabinet meeting on November 28, Iran’s President Hassan Rouhani said that Iranians “felt relaxed” while also expressing concern about the looming political and economic earthquakes set to hit Iran in the near future.

These kinds of inconsistent statements are not exclusive to Rouhani. This is a general phenomenon in the Islamic Republic of Iran with many believing that they are the characteristics of a regime that is stuck in a state of limbo.

“The Islamic Republic does not intend to go to war with anyone but we have to increase our capabilities so that the enemy fears attacking Iran,” he said.

Rouhani speaks of creating jobs when according to the head of the Planning and Budget Organization, the government does not have the budget to create jobs.

Mohammad Baqer Nikbakht warned the government that certain “people should not give empty promises to the people and raise expectations because the government has limited sources and if a certain amount is allocated to something, another share would have to be reduced from somewhere else.”

Iran also makes these kinds of statements in its diplomatic relations with other countries.

Recently, the head of the Atomic Energy Organization of Iran said in a trip to Europe that Iran’s patience was wearing thin regarding Europe’s pledges to keep up its oil trade despite U.S.sanctions.

“I will pass certainly a word of caution to her (Mogherini): I think the period of patience for our people is getting more limited and limited. We are running out of the assumed timeline,which was in terms of months,” Iran’s nuclear chief said on November 27.

According to Reuters,he also said the Islamic Republic could resume enriching uranium to 20 percent purity – seen as well above the level suitable for fueling civilian power plants – if it fails to see the economic benefit of the 2015 deal that curbed its nuclear program.

These bluffs come even though one of the key issues for the negotiations for Iran was to ease European concerns about its detrimental role in the region and to prove that they would stick to the JCPOA.

The question is why regime officials resort to these contradictory statements when the truth will obviously be revealed shortly afterwards.

Some Iranian experts say that the regime lacks a sound strategy. According to this line of thought, the government lives in the “moment” or as the saying goes, worries about tomorrow when tomorrow comes.

The reality is that the regime has two options, bad and worse, to choose between.

Domestically,it has the option of meeting the demands of angry protesters which would then force the regime to back down acknowledging that protests bear results.

The other option would be to suppress dissent; Not a good strategy as it would only fuel dissent in the long run.

Officials can only talk about a 20% increase of workers’ wages without actually implementing this strategy even while they spend millions to suppress workers who are demanding their unpaid wages.

“If the government seeks a 20 to 30 percent increase in wages, it will not solve the livelihood issues that households are facing nor would it lead to public satisfaction,” an economist affiliated with the government wrote in Janane San’at daily.

“Based on this, injecting money into the economy will increase liquidity and inflation and lead to higher prices while getting the government caught up in the mystery of how to provide the money,” he added.

Inits foreign and regional policy, even if Iran wants to nudge closer to a deal with Europe and even the US, it would have to halt its missile production and regional interventions which would deal a serious blow to the very existence of the Revolutionary Guards Corps.

Its last missile test, carried out on December 1, was met with condemnations by the US Department of State.

The Iranian government is stuck in a state of limbo, forced to constantly choose between bad and worse and sometime a bit of both.