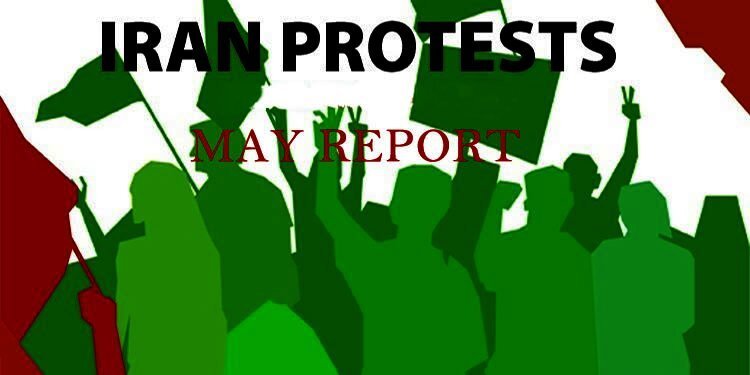 According to reports collected in the month of May, there were 262 Iran protests in 79 cities, villages and industrial regions with an average of eight protests per day.

Workers staged 74 protests in the month of May in 35 cities, commercial areas and industrial towns with an average of two protests per day. The gatherings were mostly in protest to delayed paychecks, lack of job security, dismissal of workers and the non-renewal of their contracts.

In May, retirees including government workers and teachers held three protests.

Teachers held 44 protests in 40 cities in May including:

Students held 16 protests in seven cities in May, the most significant of which were:

– Gathering at Tehran’s Social Sciences University in protest to the arrest of Marzieh Miri, a student at the university and journalist for Sharq Daily

– Gathering at Kurdistan University in protest to a university ban

Farmers held seven gatherings in seven cities in protest to their work conditions and lack of water.

Other sectors, including bakers, the family of detained labor activists, contractors and drivers, held 61 protests in 29 cities in the month of May.

There were 29 cases of hunger strikes by prisoners in the month of May. They were protesting their undetermined legal cases, arbitrary detention and not having access to fair trials.