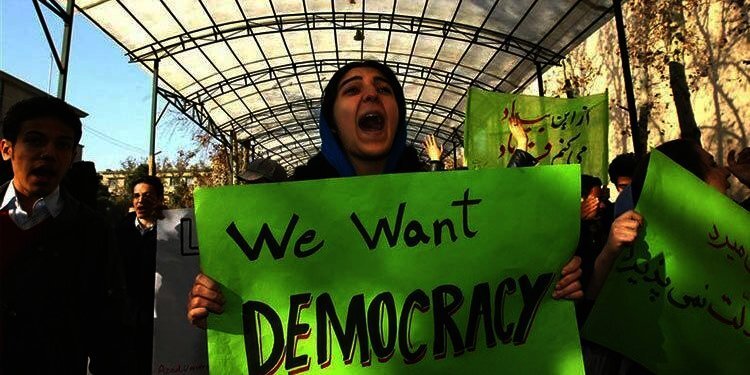 At a time when the Islamic Republic of Iran faces a plethora of crises, Iran officials are warning that allowing Iranians civil liberties, including noncompliance with the state’s mandatory hijab, was equivalent to the collapse of the regime.

According to Tehran’s Chief Prosecutor, “The enemy is trying to turn chastity and the hijab into a choice.”

“Therefore they have instigated some people to take off their hijab, trying to make their plans operational, but they were met with the decisive approach of the judiciary and the police,” Jafar Dolatabadi added.

“They believe that their struggle in the military and political arenas has reached a dead end and are therefore trying to increase financial pressures and change the social and cultural spheres,” the Tehran Chief Prosecutor said.

He stressed that the issue of the mandatory hijab was important for the Islamic Republic.

The Chief Justice of Iran also said that the “enemy” had been successful in using Iran’s human rights violations to instigate the people.

“Our enemies use the slightest incidents in the country to reach their goals and to instigate the people,” Amoli Larijani said citing the establishment of various human rights campaigns.

“They use whatever is at hand to destroy the image of the Islamic Republic and unfortunately we have not been successful in interpreting our achievements and confronting this media outbreak,” he added.

Infiltration in the Islamic Republic

A senior cleric who represents Iran’s Supreme Leader in Mashhad also raised fears about infiltration in the Islamic Republic and how the “enemies” had influence in the regime’s internal systems.

“There is danger of infiltration everywhere including in our management systems. The enemy infiltrates our economic centers and our societies.”

The head of the Mashhad Friday prayer sermon said that the “enemy had infiltrated” the regime’s ideological organizations and even its closest forces.

He described any changes in the lifestyle and civil liberties of Iranians as a threat to the destruction of the system.

“If our religious society turns into a non-religious society, and if people change, they will no longer care for the state and will distance themselves from it and in this way, it is easier for the enemy to suppress and destroy the state,” the senior firebrand cleric said.

In 1985, it became mandatory for women to wear the hijab with a law that forced all women in Iran, regardless of their religious beliefs, to dress in accordance with Islamic teachings. The hijab became a tool for implementing the government’s strict religious ideology.

According to article 638 of the Islamic Penal Code, “women who appear in public places and roads without wearing an Islamic hijab, shall be sentenced to ten days to two months’ imprisonment or a fine of fifty thousand to five hundred Rials.”

40 years of torture - Report on torture in Iran