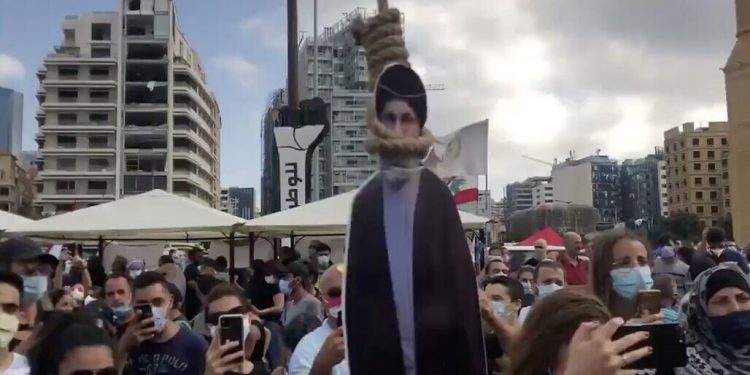 The Iranian regime is worried that its terrorist brainchild, Hezbollah, is losing ground in Lebanon after last Tuesday’s huge explosion that killed over 200 people in Beirut.

The Lebanese government is reportedly about to resign amid mounting anger by protesters who blame Hezbollah and Iran. Three ministers have already stepped down, but there have been calls for the whole cabinet to go. Angry protesters blame the explosion and Lebanon’s poor economic state on the country’s corrupt leaders, namely Hezbollah.

Videos on social media channels showed protesters hanging an effigy of Hezbollah leader Hassan Nasrallah by a noose in Beirut.

Keyhan state-run daily, known as the mouthpiece of Iran’s all-powerful Supreme Leader, expressed concern over Hezbollah’s fate in the country after the huge blast.

“Whether this explosion was intentional or not, those who are looking to weaken Hezbollah benefit from it more,” the newspaper wrote on August 8.

“Saad Hariri, France, and the West in general, say the solution to the crisis in Lebanon is to carry out ‘structural reforms.’ Is ‘structural reform’ anything other than weakening or destroying Hezbollah?” Kayhan added.

Yesterday, Fars News Agency affiliated with the Islamic Revolutionary Guards Corps (IRGC) claimed that various media outlets with “certain affiliations” were “taking advantage” of the blast to “tarnish the Resistance”, aka Hezbollah.

“Lebanon is witnessing a media war that can determine many equations in this country and the region,” Fars wrote.

Speaking to the news agency, a regime insider introduced as an international relations expert also expressed concern over Hezbollah’s fate in the country.

“Whatever the true cause of this explosion and whether it was intentional or not, most of the various narrations that were presented after the blast was aimed at Hezbollah,” Mehdi Khanali-Zadeh said.

Etemad Online state-run news agency referred to the French President’s Thursday visit to Beirut and said that one of Macron’s goals in Lebanon was turning Beirut to a region purged of Hezbollah. Etemad said that France wanted the closure of all of Hezbollah’s institutions and arsenals in Beirut.

A threat bigger than the Beirut explosion

According to the Resalat state-run daily, Lebanon’s protests against Hezbollah were more threatening than the Beirut explosion.

“News from Lebanon is troubling,” the daily wrote referring to the protests.

The daily said that the protests were carried out by “organized groups” that were “attacking government buildings including the parliament and Foreign Ministry”.

“This amount of unrest will gradually lead to certain tendencies”, Resalat said.

The Iranian regime also fears that current Lebanese protests aimed at the country’s corrupt officials will spread to Iran.

According to a former member of the National Security Committee in Iran’s Parliament “the enemy wants to weaken the Islamic Republic of Iran by creating crises in Lebanon and Iraq”.

“Lebanon’s seditions and riots resemble the events of November 2019 in Iran,” he told the website on August 9.

“The enemies of the Resistance Front are trying to pursue their intentions by weakening the governments of Lebanon, Iraq and Iran. They want to cause instability with riots and clashes as was the case last November in Iran,” he added.

The former MP said that the regime was able to control the protests because it was “powerful in controlling crises”.

What he calls “power” was actually the regime’s use of brutal force during the last round of protests that shook the country.

The regime indiscriminately killed more than 1,500 men, women, and children during the few days of protests amid an internet blackout.

Naqavi encouraged the Lebanese government to follow suit and crackdown on protesters.

“The Lebanese government can deal well with its internal crises, especially crises of foreign origin, by following the example of the Islamic Republic’s crisis management,” he said.

In a recent video, Hezbollah leader Hassan Nasrallah denied Iran’s influence in Lebanon. This is while Nasrollah proudly stated in a 2016 video that “We are open about the fact that Hezbollah’s budget, its income, its expenses, everything it eats and drinks, its weapons and rockets, come from the Islamic Republic of Iran.”