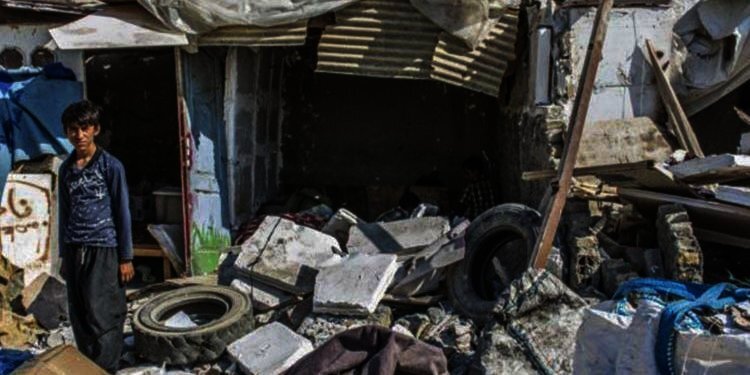 According to reports, more than 200 people participated in the protests.

Before this, trash scavengers gathered dry waste while the municipality handled the wet waste.

There were simultaneous reports on Iran’s state-run media that more than 40,000 square meters of agricultural land were “freed” in Shahr-e-Rey, Tehran.

Though not covered by state-run media at the time, what actually took place was an attack on the makeshift shelters of hundreds of mostly Afghan trash scavengers.

According to unofficial reports, forces affiliated with the Ministry of Agricultural Jihad and Iran’s Department of Environment attacked the shelters in Shahr-e Rey’s Ashraf Abad neighborhood. The attack took place on October 20.

The shelters were reduced to rubble with loaders and with the aid of Special Forces, the police, and the fire department during the “surprise” attack.

A number of the residents were beaten with batons and were tasered. More than 500 people, only in one area, and a total of 120 children became homeless and were forced to sleep in the neighboring desert areas and corn fields.

In a report on the aftermath of the attack, Fars State-run News Agency said today that the land was not actually suitable for agriculture and that the residents paid rent to settle on the land.

No accommodations were considered for the more than 600 homeless residents.

Many Iranians have turned to trash scavenging as a way to make ends meet. According to a regime official, around 80% of Iranians live under the line of poverty.