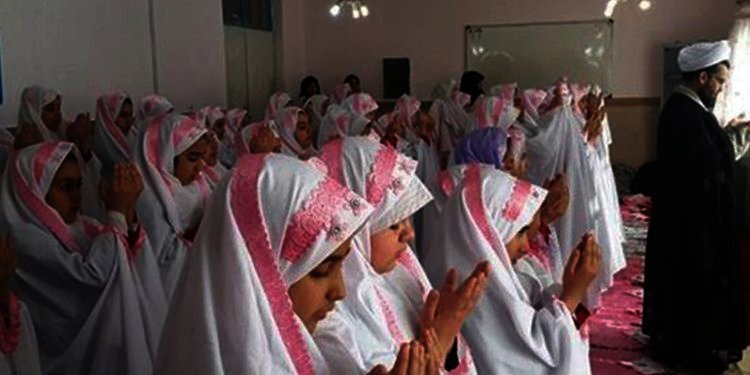 Since Iran’s “Cultural Revolution” shortly after the 1979 revolution that brought the clerics to power, the regime has been systematically brainwashing children, forcing its brand of Islam and politics on them at schools.

Nowadays, children as little as seven are forced to take part in irrelevant mourning ceremonies, act out scenes from the day when the founder of the Islamic Republic, Khomeini, came to Iran and write essays on how much they adored the now-dead commander of the Quds Force Qasem Soleimani.

“When I got to school today, some of my students were waiting outside the door. After greeting them I asked why they were standing outside. ‘They’re beating their chests in mourning in there on the first day of school,’ a student told me.”

This was part of an article written by Jafar Ibrahimi, a member of Tehran’s Teachers’ Association who was released on bail three days ago from the notorious Rajaie Shahr Prison in Karaj near Tehran.

He was detained on December 26, 2019 for taking part in a ceremony to commemorate the more than 1,500 civilians killed by the regime in nationwide protests that swept the country in November.

Ibrahimi also said that the school would not register some of the boys because their hair was too long.

The severe presence of the regime’s “religious revolutionary ideology” in Iranian schools is one of the most prominent features of Iran’s schools and the educational content of student books.

The presence of ideological and political material is at least three times the average of the world.

According to Saied Peivandi, a regime affiliated university professor and education expert, “While on average about eight percent of school time is devoted to religious issues in the world, in Iran (religious classes) officially take up close to 16% of school time. This figure is actually closer to 25% (when considering religious and political programs in the curriculum which are carried out outside of the classroom).”

The current state of Iran’s education system has become so poor that even those loyal to the regime’s school system are now criticizing the effects it has on children.

Rahim Mohammadi, the head of the Iranian Society of Sociology, said that children had become “disillusioned” with the way the Quran was taught at schools.

In the Islamic Republic’s strategic education texts, the priority of “(self) purification” over “education” is explicitly mentioned.

“The most important ailment of our education system is that it’s ideological and all other ailments are because of that,” he said in comments carried by the IRGC affiliated Tasnim News Agency.

The regime has utterly failed in brainwashing Iranians as children to force them into submission. The students and young people who were the most active in recent protests that swept across Iran were also subjected to the same forced ideological education at school.

They have now become the fiercest opponents of the regime. The children who were taught to revere the regime’s Supreme Leader, Ali Khamenei, as an Imam, are now university students chanting on the streets for his downfall.