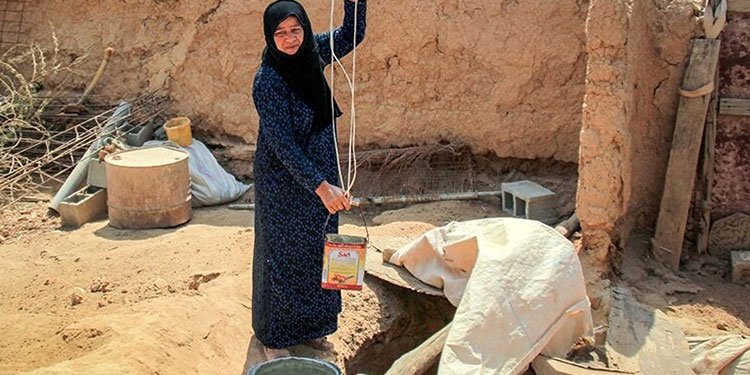 Locals in Gheyzaniyeh, a rural district in Ahvaz, southwest Iran, have been suffering from a severe lack of water and other basic facilities for many years. Even in public schools, students must pay for drinking water and are forced to attend classes in freezing trailers during winter.

Although this district has over 300 oil wells, it is one of the most poverty-stricken areas in Khuzestan province. One of the main problems of the residents is drinking water deprivation.

Gheyzanieh consists of 80 villages and has a 25,000 strong population. Last week, villagers blocked roads to demand running water. Iranian security forces responded with rubber bullets and pellet guns wounding locals including a teenage boy who was hit in the knee.

To save face, the regime’s president, Hassan Rouhani publicly ordered that the region’s water issues be resolved. After that, the Managing Director of the Khuzestan Water and Sewerage Organization promised to have the water problem solved by June. The Khuzestan Governor then said he would resolve it by May 25. Problems with the water infrastructure in Gheyzaniyeh have been lagging for many years. The question is how it can be resolved in just a matter of days. Such promises by regime officials have also been made in the past.

“The students didn’t have access to the Shad app when schools were out due to the epidemic,” he said about the homegrown app made to facilitate education during the COVID-19 crisis.

He said the children did not have access to the internet or could not afford smartphones.

According to Zoheiri, the district’s water system collapses every two years and the villagers take to the streets and protest, but the problem is never permanently solved.

“We have problems with the schools, asphalt roads, electricity, hygiene, and other issues but we can’t live without water and food,” he said.

Since locals do not have running water, they have to buy water in barrels for around 2,000 tomans for 20 liters.

Therefore, the most impoverished families usually spend 100,000 tomans a month for drinking water.

Zoheiri also said that the 5,800 school students paid 20,000 tomans for drinking water at school. Sometimes when there is no drinking water, the villagers buy water from private companies, which costs between 100,000-400,000 tomans.

In addition to the drinking water crisis, there are only about 20 people on a monthly payroll in Gheyzaniyeh. The rest of the residents work on farms, have small stores, or drive taxis, according to the Khuzestan Governor. Many graduated students holding a bachelors or doctorates degrees are now working as construction or tile workers, and do not have a stable income.

According to a farmer who spoke to state-run media, despite their protests and promises made by officials, locals were not given any water last Tuesday.

“On Monday, water was pumped for an hour only. The water tankers sell their water on the outskirts of the village so there is nothing is left for us,” Hashem Memari added.

Memari said that two of his horses had died from thirst. He said that each of the horses cost 200 million tomans. He was forced to put down one of his cows and sold another one before it too died of thirst.

Memari said that in the summer, they have an hour of running water once every 4 days. He said some of the water is sold to nomadic farmers, aggravating the water problem in Gheyzaniyeh.

He also said that lack of water was killing his produce.

“I spend 4 million for farming each year, but only harvest 3 million due to the lack of water,” he said. Memari has a high school diploma and had requested work in one of the oil companies near his village but said that the companies did not welcome his request.

Water tankers will not solve the problem

According to the Gheyzaniyeh village official, the district’s water problems will not be resolved with water tankers.

“The water infrastructure project should be started as soon as possible,” Jamal Doraghi told the state-run Iran daily.

According to him, tankers will only resolve water problems for 10 households in a village. The other villages will still be deprived.

Doraghi said that when there is running water, “the water flow from the neighboring water plants is so weak that villages that are further away don’t get any water.” Some families do not even get 10 minutes of running water.

He also said that tanker drivers were involved in a semi-mafia network trying to get their fill from the crisis.

“They check to see who can pay the most and take the water to them,” he said.

Doraghi said that school children not only paid for their drinking water at school, but they were also forced to pay the wages of the school security guard and the teachers’ whiteboard markers.

Deprived residents of Gheyzaniyeh and other regions in the oil-rich city of Ahvaz are angry that the regime spends the money from the oil in their region on everything but their basic needs.

According to Statista, the regime spends an annual $6 billion in Syria, $1 billion in Iraq, $700 million in Lebanon, $2 million in Afghanistan, $100 million in Palestine and another $100 million to fund the Houthis in Yemen. All of this money goes towards funding Iran-made terrorist groups that do the regime’s bidding in the region.

A prominent former lawmaker recently said that the regime has spent billions in the past decade to aid the Assad regime.

“We have spent maybe $20-30 billion in the past decade in Syria. That’s where the people’s money has been spent,” Heshmatollah Falahat Pisheh said in an interview with the state-run Etemad Online website.