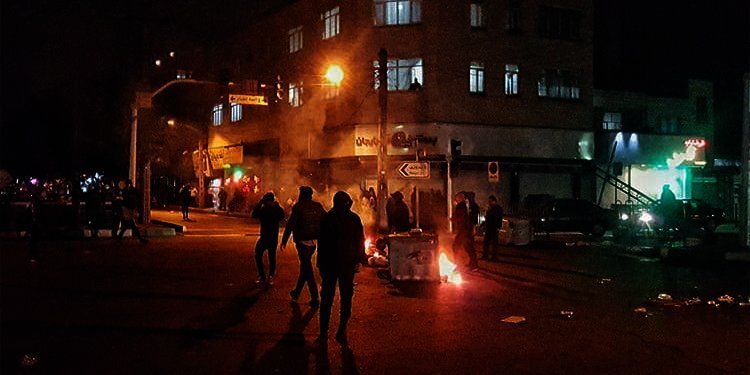 The father of a young man in Tehran says that his son was unjustly sentenced to eight years of prison after he was arrested for taking part in protests that shook the country in 2019.

According to the 24th Branch of the Tehran Revolutionary Court, the young man was sentenced to eight years of prison, 74 lashes for “conspiring and assembling to disturb national security” and “robbery”.

Speaking to Rouydad24 state-run website, the father of the young man identified by his initials as PG, said his son did not take part in the protests.

Major protests broke out on November 2019 Iran after the regime tripled the price of gasoline overnight.

PG’s father, a taxi driver was on his way back home during protests when he noticed the bank near his house on fire. “I was describing the events at home and my son went out to the streets to see for himself,” he said.

“The bank fire had gone out, and there were only the burnt remains left. A group of people raided a chain-store a few blocks down and were emptying its shelves. My son also went there and took a chocolate bar. He was arrested and taken to prison, and now they have given him eight years of prison for a chocolate bar.”

The court charged the young man with destruction of the chain store, but his father said his son went there only after the store was already destroyed. PG’s father stressed that neither him nor his son were politically inclined. He said this sentence was not fair and that he wanted an appeal. “Otherwise my son would not have a future,” his father said in the interview.

PG was arrested one week after the bank fire incident and was told that he had committed armed robbery. His motorcycle was also confiscated. Despite his parent’s frantically searching for him, he was not found until 48 hours later. The interrogators called and said he was being held at the Great Tehran Penitentiary, also known as Fashafuyeh Prison. He was in prison for 75 days, and was then released on a 600 million toman bail, about $25,316.

PG’s father, who has a low income, said he had to borrow the bail money to get his son out of prison, and that he has not been able to pay his rent for three months. After his son was sentenced to eight years of prison without any access to a lawyer, he found a lawyer who accepted to work pro bono and defend his son.

“PG was recently married, and his wife is constantly worried about his condition. He might have to get separated from his wife if he is taken to prison for eight years,” the father added.

Iran’s Revolutionary Courts, a court system that hears national-security cases, are notorious among Iranians as places where verdicts are predetermined, and proceedings can finish in just minutes. Political activists are usually sentenced to prison or even death in grossly unfair trials without the right to a lawyer.

On August 5, a 30-year-old protester was hanged in the central city of Isfahan for taking part in the 2019 protests. The father of two was charged with killing an IRGC agent during protests. Despite being severely tortured, he denied the charge and was condemned and executed without any evidence.

Terrified of future nationwide protests, the regime has sentenced many protesters and civilians to death and long prison terms to intimidate Iranians and prevent future unrest.