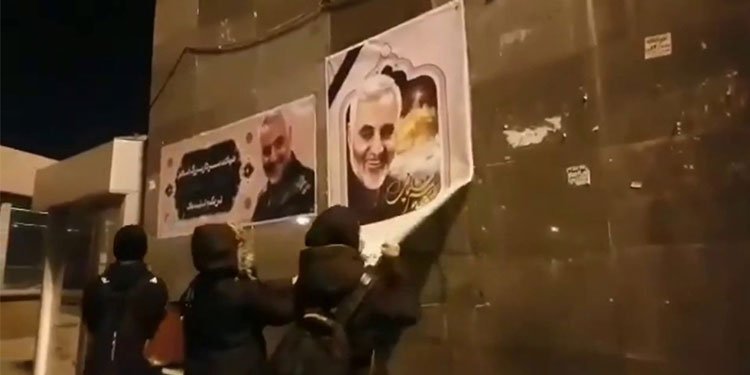 A court in western Iran sentenced three young Iranians to hefty prison terms for burning a banner of Qasem Soleimani, the now dead commander of the Quds Force.

According to human rights groups, Arman Hosseinzadeh, 20, Bahman Rahimi, 19 and Milad Hosseini, 19 were sentenced to overall 16 years and six months or prison by a Saqqez court.

The Saqqez Revolutionary Court charged them with “spreading propaganda against the state by torching banners depicting Qasem Soleimani” and “membership in a Kurdish party”.

Security forces arrested the three in January along with a teenager identified as Sina Abdollahi.

According to the report, Baham and Milad are currently in detention while Arman and and 17-year-old Sina are free on bail.

Qasem Soleimani, the second most powerful man in Iran after the regime’s Supreme Leader Ali Khamenei was the commander of the Quds Force. The Force was responsible for organizing regional terrorist groups such as Hezbollah and Hamas.

After Soleimani’s death, large banners depicting him as a hero were put up all over the country. Many were torched by Iranians.

In January 7, the Public and Revolutionary Prosecutor of the central city of Shahreza said that insulting Soleimani was tantamount to blasphemy. Hossein Razaz Zadeh said four people were arrested in the city located in the province of Isfahan for “insulting Qasem Soleimani” on social media platforms.

Iran’s Minister of Education recently told state-run media that the “story of Haj Qasem” would be added to student textbooks.