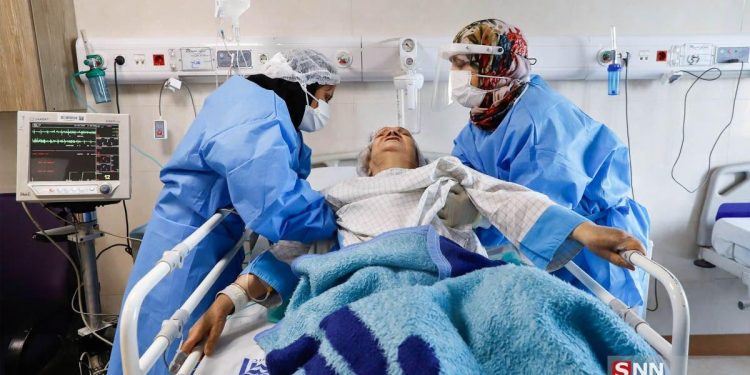 A member of Iran’s Coronavirus task force said that the regime was intentionally downplaying virus fatalities in the worst-hit country in the middle east. Dr. Mohammad-Reza Mahboubfar, a viral epidemiologist said that the “figures announced by the Ministry of Health were just 1/20th of the real figures”.

This is not the first time health officials question the Health Ministry’s figures.

Speaking to Jahan San’at News website, Dr. Mahboubfar said that the first cases of the deadly virus were found in Iran one month before it was officially announced by the regime.

“At that time, the government covered it up due to political and security reasons and only announced it after the ceremony for the anniversary of the revolution and parliamentary elections,” he said.

“Unfortunately, from the very beginning, the information given to the public was not transparent. Certainly, the figures have been engineered since the beginning of the coronavirus outbreak in the country. In any case, these statistics are announced based on political and security considerations.”

Widespread testing not being carried out

According to the viral epidemiologist, widespread testing was not being carried out by the regime.

“Contrary to what has been announced by the Ministry of Health and the National Coronavirus Headquarters that coronavirus tests have increased, I must say that today, due to lack of facilities and equipment, coronavirus tests are performed for people over 60 and for people with underlying diseases. Ordinary people such as children, adolescents and young people, if they are suspected of having the disease, must go to private laboratories, and the minimum cost of the tests is about 300,000 tomans,” Dr. Mohammad-Reza Mahboubfar said.

The member of the coronavirus taskforce said that they had information that many labs had created a black market for coronavirus testing and received up to one million tomans for the tests.

“Countries that were able to overcome the disease did two things: first, they screened the population and identified suspects on a widespread basis and second, coronavirus tests were performed extensively and free of charge,” he said.

Dr. Mohammad-Reza Mahboubfar criticized the government for its “lack of will to control the virus”.

He said that if “strict quarantines” were not implemented in Iran, the country could witness another wave of the coronavirus in autumn which would increase the number of daily fatalities to a four-digit number.

Mina Mohrez, a member of Iran’s COVID-19 Committee also said that the regime was not taking the epidemic seriously.

“Coronavirus has become stronger and more infectious and we will experience a very bad autumn,” the infectious diseases specialist said.

Mohrez said in many provinces including the capital, “most hospitals are overcapacity” adding that “ICU’s are almost all full”.

Iran’s Ministry of Health announced today that during the six months of the epidemic in the country, 18,427 had died from the deadly virus.

However, the National Council of Resistance of Iran, the regime’s opposition group that has disputed official fatalities from day one said today that 85,500 Iranians had died in 373 cities.